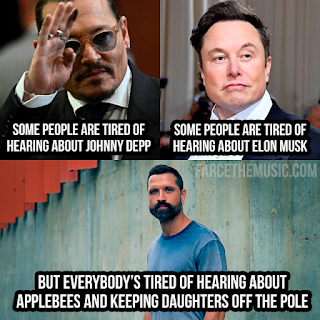 “You orta be ashamed,” began Aunt Bernadette’s reply to your Facebook post. “That man has a wonderful Christian testimony.” She was commenting below the meme you posted about pop-country star Walker Hayes and was quite upset with you.
“You’re mama annem raised you better then that,” she went on. “Wish you’d take this down.” The normally cheerful and warm Bernadette McPhail, your mom’s step-sister from your granny’s first husband, was very worked up about your inability to enjoy Walker Hayes’ insipid talk-singing songs about restaurants and styrofoam. Surely his upstanding morals make his silly novelty songs lay more easily on your ears?

The meme, seen above right, portrays Hayes’ music as a far greater cultural annoyance than the constant news stories and social media posts about Elon Musk and Johnny Depp. You shared it from the Farce the Music page, so it’s not like you made it… why can’t she take a joke?

Auntie Bernadette, however, thinks you should focus only on the positive aspects of Mr. Hayes’ life. Oddly enough, she wasn’t able to focus on the positives of her ex-husband, who was also a good Christian, albeit one with a penchant for driving over to the riverboats in Vicksburg a bit too often.

“It’s not like I made fun of Walker’s faith,” you think, still firm in your opinion of his just-shit-awful music, “Aunt Bernie’s current “Godly” husband may or may not have once owned a white suit with a pointy hat, but we don’t talk about that, do we?”

At press time, Aunt Bernadette was praying for your eternal soul with a Salem Light hanging from the corner of her mouth, and considering calling your mother.