From the forthcoming Backlash. 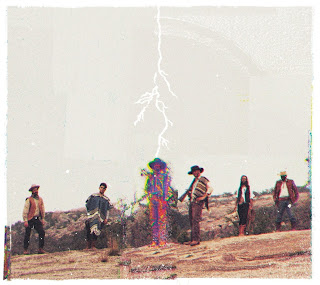 From the opening heavy, fuzzed-out riff of Electric Slave, we know that this is a new Black Joe Lewis.  Not only musically, but in name as well.  Black Joe Lewis has opted to drop the Honey Bears from the band name.  Not to worry, the horns are still there.  The funk is still prevalent.  But, this is something a bit heavier, a bit more Stooges than Stax.

One of the first things I noticed about this new outing by Black Joe Lewis is the more pissed off tone of the album versus his last two outings.  Not to say it hasn't been on other albums-Scandalous had the terrific "You Been Lyin."  It's just that this album takes that emotion and increases the tone to that proverbial 11 level.  The subject matter blends perfectly with the minor chords that dominate the album.

"Skulldiggin" starts the album off with a bang and really never lets up.  By the time you get to the excellent "Come to My Party," it's clear that Black Joe Lewis wants to blend every style available to him.  I dare you to listen to that song and try to sit still.  I don't think it's possible.

It's the next half of the album that really picks up and takes the album to another place.  The back-to-back songs "Vampire" and "Make Dat Money" are great band workouts.  Lewis's voice fits the songs so perfectly.  Rough and amplified, it's a vague reminder of The John Spencer Blues Explosion, albeit taking only rough notes from that playbook.  The next song, "The Hipster" is a song so perfectly angry and humorous- I can only imagine the Williamsburg crowd listening to the song very uncomfortably.

I don't know that I would say this is Black Joe Lewis's best album.  It's definitely not the worst.  This is a step in a direction that I think will suit Lewis in the long run.  The horns are still there.  The funky guitar rhythms are still there.  But, there is a new urgency.  There is a demeanor that the music has taken on....a more sinister demeanor?  I'm not sure if that's the best way to describe it.  I'm not sure I know how to put it in words.  I think you should listen to it.  You will like it.  That is something I am quite sure of.

If I had to complain about a couple things on the album, it would be the vocals mix and "Young Girls."  While I enjoy the sound most of the time, there are times where it gets a bit difficult to discern the vocals due to being lost amid the guitars, drums, and horns.  It's only a minor complaint, though.  Also, "Young Girls" starts off fairly weakly.  I nearly skipped it.  I didn't, and I was glad I didn't.  The song grows into it's own, but it's the weakest song on an otherwise incredibly strong album.

This album will grow on me.  I like it a lot so far.  I see it potentially being on my year-end list with more listens.  This is a blues album for the times.  No doubt about that.  It's been a frustrating year and some angry, fun, funky blues is just what we needed.

Pick the album up here, here, or here.
The latest nonsense from Farcer at 1:30 PM 0 complaints

14. John Popper & the Duskray Troubadors - Champipple
15. The Decemberists - Don't Carry It All
The latest nonsense from Trailer at 4:00 PM 3 complaints

From their fantastic new album Scandalous, here are Black Joe Lewis & the Honeybears with "She's So Scandalous." RIYL: James Brown, The Rolling Stones, Lightnin' Hopkins.
The latest nonsense from Trailer at 9:00 AM 0 complaints