Straight From the Bottle: A Review of Gethen Jenkins’ Western Gold 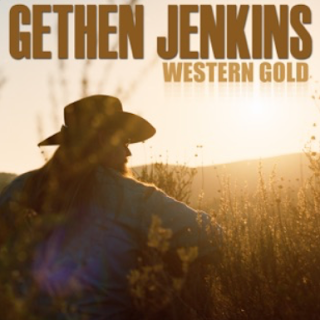 A throaty, whisky burnt growls kicks off Gethen Jenkins new album, Western Gold, (out today) and straight off you know what to expect, as the opening track is drenched in Honkytonk nostalgia. Call it a throwback or call it traditional, this album is pure old, drinking-your-heartache-away country, with a dose of pissed- off I don’t give a shit served as a chaser.

Born in West Virginia and raised on steady pour of Outlaw and Honkytonk tunes, Gethen is also influenced by his time as a Marine as well as his two decades of life in California, and every last one of these influences shows up at one time or another on this album.

Slide guitar goodbyes and dancehall defiance define the first track, “Bottle In My Hand.” A barroom anthem to drinking her away that gives way to the more melancholy, “Heartache Time.” This second track captures the emotion after that first round of I don’t need her bravado. The booze infused emotion continues with “Whiskey Bound,” which continues the up and down ride through the emotional train wreck of life.

The album finds a new energy with “Maintenance Man,” a tune that is the musical equivalent to a Penthouse Forum letter. The rebellious tone continues even on the slower tempoed “Restless Ways,” and “Waiting” which come back-to-back in the middle of the of these eleven tracks. A pair of songs those are both reflective and reaching in nature.

“Western Gold,” kicks off the back half of the album, and as the title track, it carries the banner for a collection of songs that speaks of the fleeting nature of humanity. This particular tune does so with an unflinching honesty that says, “Yeah I’m leaving, but hey we are both here now so let’s make the most of it.”

Lord knows it ain’t easy loving the restless kind, and “Strength Of A Woman,” takes the emotion of that and distills it down for those who dare try to tame the wild wind of a rambling man.

Imagine David Allan Coe penning a song specifically for Jerry Lee Lewis and you will have a solid idea of how “Basket Case” sounds long before you hear the ninth track of the album.

“While I’m Away,” returns to that fleeting nature of relationships, with an ode to uncertainty and insecurity. Easily the most vulnerable of any song on the album, it is also perhaps the most well-written. The last track, “Me My Bottle And Nothing But Time” recaptures the IDGAF spirit of the beginning of the album, with yet another alcohol soaked set of lyrics that scream barroom jukebox.

Like a lone shot of whiskey, the collection of songs that is, Gethen Jenkin’s Western Gold feels rowdy and raw when consumed singularly, but taken as a group, that burning edge is not nearly as prevalent, leaving you to notice the complex subtleties in both flavor and emotion.

Travis Erwin is a fiction writer, lyricists, and music critic. A native Texan Travis now calls the West Coast home. His work can be found anywhere books are sold, and you can reach him on twitter @traviserwin or via comment on this post.