A Conversation with Adam Greuel of The High Hawks

The word “supergroup” gets overused to describe side musical projects, but it's apt and well-earned when it comes to The High Hawks.

What’s striking about this collaboration’s first, self-titled LP is that it bears little – if any – resemblance to what fans of the foregoing bands are used to hearing. There is some serious, cosmically inspired symbiosis afoot. 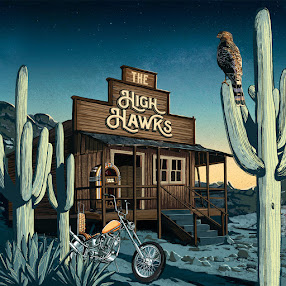 Indeed, the baker's dozen of songs – released today -- that make up their debut have the strong identity and cohesiveness of a band three records in to their career. The summery, fiddle-infused opener, “Singing a Mountain Song,” with its self-referential line – “Soaring like a high hawk across this mountain top,” -– acts as a kind of mission statement for the whole collection. There's a lot of good feeling and optimism in these grooves, from the celestial cowboy vibe of “White Rider” and the revved-up Cash rockabilly of “Bad, Bad Man” to the catchy, sauntering “Do Si Do,” which sounds like a great lost Grateful Dead track. Then there’s the spare, emotional cover of Woody Guthrie's “Fly High,” and “Just Another Stone,” a moving ode to love's redemptive power. Throughout, the creative hand-offs between four songwriters and four distinct singers all come together to channel influences from bluegrass to folk to reggae to cosmic Americana, into a singular, appealing voice.

That unity, though, comes not from a shared musical vision or taste, but genuine affection for one another. These are guys who just wanted to hang out and jam, but before they knew it, this side project had become a thing.

We caught up with singer/guitarist Adam Greuel (Horseshoes and Hand Grenades) on his way to the trout stream, and it kept coming up, again and again: He is positively joyful at what the High Hawks – even early on – have become. We were also able to tip him off to an alt-country classic.

Horseshoes and Hand Grenades – taking into account all the genre-bending that goes on in Americana – can fairly be called a bluegrass/jam band. None of your songs on this record could fairly be put into that category, and I don’t hear a bunch of Leftover Salmon influence either, for that matter. Was this album a chance to if not step out of your comfort zone, at least spread your wings a little?

Yeah. You know, with the High Hawks – one of the cool things about this band – we came together without any inkling of what the band might sound like. We really enjoy each other’s company and playing together and making this record was really just a way to spend more time together. And I think when we get along together as humans, as friends, that translates well to making good music.

And sure enough, we got together and there was that musical openness to a degree that the songs played the band, so to speak. When you’re all open-minded about where the music can go, it allows all of our collective influences into the melting pot and produce a creative sound. So, the open-ended nature of the High Hawks was probably a breath of fresh air for us all.

Speaking of influences, I’ll go out on a limb and guess y’all are all fans of The Band? I mean, Vince is channeling Levon from beyond the grave on “Goodnight Irene,” so should I assume they’re a common thread that runs throughout y’all’s eclectic tastes and influences?

Yeah, without a doubt. In the modern-day, greater Americana/bluegrass/rock ‘n’ roll genre, how could you not be influenced by the likes of The Band? The similarity, I think, that I see most distinctly between the High Hawks and The Band is the influences. A lot of the sources of inspiration for The Band are there for all of us. Another big similarity is that there’s a plethora of different songwriters and singers. And that’s a big part of who we are.

The term “supergroup” is probably pretentious, and “side project” is kind of ho-hum. If Golden Smog was a supergroup, I’d say The High Hawks qualify. Have y’all figured out how to describe this collaboration?

It’s a band. (Laughs) And you know… “supergroup” or whatever, we came together because we all liked one another and formed a band. It’s raw and it’s natural. We got together at Vince’s – he lives up in the Colorado mountains – and man, we booked a run of shows in Colorado and a run of shows in the Midwest before we had ever played a note together.

Yeah! That’s how the High Hawks took flight and found an identity. It created a really unique experience, knowing we all wanted to be in the same room together. What came out was really natural.

We’re seeing albums now that were stacked up and in the can during the pandemic; when and where did y’all record this one?

We recorded at The Silo in Denver, and it was basically in the beginning days of the pandemic. It was January, right before everything got weird. As far as the pandemic itself, I don’t know that it had a huge impact on the release of this record. It did give us some time to think about how we wanted to do it. And we had the time to go back and do some real, quality mixing and mastering.

People called the pandemic “the great pause,” and it gave us a chance to reflect. “How do we feel about this thing,” you know? It gave us the time to know that we were releasing an album we could be proud of, because we put our heart and soul behind it.

It sounds like the recording process was pretty organic. Did y’all record most of this stuff live?

Yeah, we recorded all of it live. And that was natural and a lot of fun. It’s rare that I want to listen to an album I’ve made, once the mixing is done. You’ve heard all the material so many times you think, “Okay, well that was good,” and you feel like you’ve done a good job and never listen again. But this High Hawks album – partly because of the diverse songwriters – I find myself listening a lot because I just like it! It sounds fun and takes you on a really cool ride.

But the recording process itself…Will, the drummer, and I are the younger fellas in the band; I’m 30 right now. And I’ve been listening to Tim and Vince and Chad since I was in high school. And to be in a band like this where I can truly learn from some people who have already influenced my musical understanding is really a joy and a pleasure, and I’m really grateful for that experience. And the fact that there’s such a large age difference puts a cool spin on The High Hawks, too. Because there are differences there, but there are also similarities. And I found that my attitudes toward music can be challenged by Tim or Vince in the studio. At times, there attitudes can be challenged by mine. And when respect and love are present. It can be a really cool thing.

I’d like to ask you about a couple of your songs. “Home Is” sounds like something straight off the Jayhawks’ Hollywood Town Hall. Tell me about that tune.

Well…I’ve never heard that album. I’ll look forward to listening to it.

Oh, my Lord! It’s the Jayhawks’ third album, from around 1992. Just a fantastic record.

Wow, man. I’m gonna dig into that one. Thanks for the tip! But yeah, the song “Home Is” is really influenced by some of those (Robert) Hunter/(Jerry) Garcia ballads…

Okay, yeah. I can totally make that connection now.

Yeah. You know, I play in a high-energy string band, so sometimes at home I find myself clinging to classical music, or maybe some slow-moving ballads. Songs like “Days Between” or “China Doll.” I have a friend named Peter Kahn, who’s a poet and lyricist down in Milwaukee. We went to college together, and we’re really close friends. He and I wrote that song together, and often times, I can put together these songs and relate them to his life and his experiences. And those shared experiences tie us together, really without even talking about them. There’s just a connection.

So, I took that song to The High Hawks, and the first time we played it, I thought, “I could not be happier with the way this sounds.”

Yeah! It’s just such a cool thing. The Universe has these confirming moments, you know? When you’re on the right path, the Universe can give you a little nod, and you’re like, “Yep! Keep on going!” And I’ve often felt that with The High Hawks.

Like you walked into a studio to cut that song, and there was a great band waiting for you.

For sure. And I know that’s the case with all the fellas. These songs just came to life. You know, Tim Carbone – who plays with Railroad Earth – he doesn’t really sing, and they don’t play many of his originals. He’s an incredible songwriter! There are a couple of his songs [“Just Another Stone” and “Blue Earth”] on the album that are really phenomenal. And the same with Chad and Vince: just some really cool songs. And it’s awesome to see all these songs come to life – like I said earlier – through that High Hawks filter.

Now that I think about it, “Trying To Get By” is a little Jayhawk-y, too. But between it and “Heroes and Highways,” it seems that finding one’s way is a theme in your writing, at least on this album.

Yeah, I suppose so. We’re all evolving beings. Some things stay the same, but I have a hard time believing any of us really remain exactly who we were; we change every moment with experience. I think we’re all trying to find our way, trying to be the best person we can be for the world around us. And some time we find these sorts of…spirit guides, I guess, and we’re really lucky when that happens. Sometimes it can feel as if the Universe guides us to a group of people when we need them most.

And I think that’s the case with all of us in The High Hawks: We all needed this band in one way or another. And that’s part of the magic. It’s gratitude for the Universe bringing us together. And hopefully for the people who hear it, they’ll get the little cosmic nudge they need.

I’m going to rephrase my final question because the course of our conversation has mandated it. This album isn’t a one-off, is it?

(Pauses) I do not believe so.

Nah, not a chance these boys are done. This album is so good, you’ll wait impatiently for the next one.

The High Hawks is out today on LoHi Records and everywhere else you might consume music.