Burning Churches, Suicide, and Murder: the Lords of Chaos Have Arrived 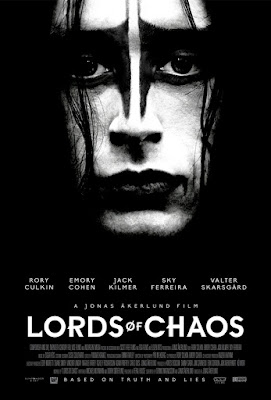 Slap on your leather jackets, grab that upside down cross and get ready to call up Satan from the nether realm because hitting the theaters this week in select cities is Jonas Åkerlund’s film adaptation of the book everyone in metal was talking about twenty years ago: Lords of Chaos.

The book and the subsequent film is a look at what was going on in Norway during the late 1980s and early 1990s with bands like Darkthrone, Burzum, Emperor, and most notoriously, Mayhem.

While the rest of metal was partying, writing massive solos and seeing an evolution with bands like Pantera and Sepultura rise in the states, Norway was onto something completely different: they were birthing black metal, a sub-genre bathed in extremity from the look, the sound, and the attitude. Everything was about being more controversial, more metal, more dedicated to the black arts, to the lifestyle than ever buying into anything mainstream or even ‘happy.’ The Norway black metal scene demanded bands be fast, heavy and ultimately driven by brutality and fear thanks to a culture of long black hair, fast riffs and songs never meant to be played on the radio or by anyone who didn’t get the aesthetic from top to bottom.

Mayhem stuck pig heads on sticks, while lead singer Dead huffed the scent of death thanks to some roadkill in a paper bag just before showtime. Soon, an entire genre was flourishing in Norway and these kids were at the center of the movement.

Over thirteen churches were burned, a gay man was murdered, and two of the most distinctive figures in the Oslo scene, Mayhem’s Euronymus and Burzum’s Varg Vikernes were tied in a brutal danse macabre till one of them ended up in the grave, while the other in jail.

The pace of the movie is frantic as it follows the formation and establishment of Mayhem’s presence as well as what followed, the explosion of the black metal in the Scandinavian countries, I mean the place is dark, rainy and depressing, and with a lot of trees.

To make the plot even grimmer, Dead, Mayhem’s singer committed suicide while  Euronymus snapped photos of his corpse while telling the rest of his band he’d saved pieces of Dead’s skull to put on a string and wear as necklaces. The whole enchilada is insane; what those kids were doing remains the stuff of lore because it’s always felt like a movie, and ironically now is one.

With Jonas Åkerlund’s vision of the material, the shots are beautiful, with some very interesting camerawork that definitely calls on his experience as a music video director. Åkerlund was also involved in the European scene back in the day as he was Bathory’s original drummer. He’d actually knew Dead for a time, so the pedigree is there. The overall vibe of the film plays on that inherent darkness, that lack of reason, but knowing that the work being put in, even if for the sake of building something grim was for show or for a dedicated stance to remain true to some kind of metal belief system.

Lords of Chaos is less about black metal instead it is about the spoiled existence of Vikernes and Øystein Aarseth AKA Euronymus. Both came from wealthy families who helped bankroll their dark metal fantasies. Aarseth’s father helped him open a metal record shop while Vikernes’s mother paid for the original Burzum recordings. Instead of showing the bands sweating it out in the clubs, the reasoning for the corpse paint, how Emperor rose to the top of the game, despite the drummer Faust murdering a gay man as an act of self-oppression in a park after a few beers, the movie is about a push and pull of two identities.

The movie is visually beautiful. The church burning scenes are well put together, and the black metal scene did look like a lot of fun. It’s a matter of perspective on what you want out of a music biopic, because this movie is about raw emotions, not being evil in the woods.

Admittedly, there are some throwaway elements to the Lords of Chaos, Rory Culkin does an incredible job of portraying Euronymus, but ultimately the character’s unlikability makes his demise easy to swallow, despite the murder and suicide scenes in the movie being absolutely horror-flick brutal. Sky Ferreira was thrown into the film as Euronymus’ love interest but plays a paper-thin role as nothing more than a photographer willing to get naked.

If there’s anyone who takes a beating in the film, it’s Vikernes. Throughout the movie, he’s portrayed as a maniacal, ugly person that’s self-obsessed and willing to go too far in the name of metal. If the real Varg Vikernes sees the film, I’m sure his YouTube channel will be ablaze with rants considering the Neo-Nazi, legend-murdering asshole posts multiple videos a week, and sometimes on the hour. Emory Coen does an impressive job of being a believable psychopath, which with the last name “Coen” is sure to boil Vikernes blood.

The story at the heart of Lords of Chaos is something metalheads have obsessed about for decades now. Black metal is still a thriving music scene, and people across all genres of the music find the story about what was happening in Norway fascinating. There are books, documentaries and now a feature film about these kids in black leather jackets and white corpse paint. The story has become something of a cultural ownership battle: what’s the heart of the love, is it what the music means or what the lore of the scene has done to propagate the music as pure “evil?” Euronymus wasn’t an evil genius, but he was PT Barnum showman getting people to buy into the schtick of black metal, of necromancy, Satanism, and witchcraft. While his was a world of bankable fantasy, Vikernes bought the story hook, line, and sinker – making the mantra of the “black circle” as they called it his religion.

Everyone involved in the Lords of Chaos story were just kids. When Dead took his own life, he was only 22. And when Varg Vikernes murdered Euronymus, they were each 25. There’s a significant through-line of childishness and callow youth in Lords of Chaos which teeters on the absurd, but if viewed as a snapshot of the insanity that was the time is expected. While not perfect, Lords of Chaos is a piece of media that every metalhead should watch because their story is ingrained into the culture, for better or worse. The average square won’t get it, and it’ll show. So, hail Satan or not, whatever – just don’t kill someone. 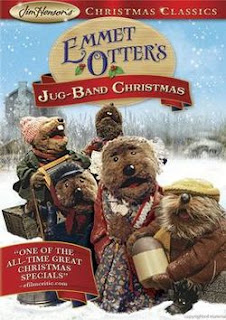 As the debate rages on over if Die Hard or Gremlins or Edward Scissorhands are Christmas movies, there’s one definite holiday film that’s gone under the radar far too long. A cinematic gem that is appropriately old school in its themes of love, morality, and having a damned good time, Emmet Otter’s Jug band Christmas is the best Christmas movie you’ve never seen.

Almost like a country-fried Wind in The Willows, Emmet Otter’s Jug Band Christmas is an early Jim Henson production. Released in 1978 and loosely based on O. Henry’s The Gift of The Magi, Emmet and his mother live on the river performing a litany of odd jobs. Emmet mends fences or fixes stairs while Ma washes clothes for the town rich folks. She even barters to make pies and sell them. The defining element of Emmet and Ma’s relationship is their love of music. Music is everything to them.

Christmas is fast approaching, but because Emmet and Ma both scrape by, they don’t have any money for gifts. Emmet gets wind from his friends that the town hall is putting on a talent show. His friends broach the idea of starting a jug band. They ask Emmet to join, but he declines because he can’t live with the idea of putting a hole in his mother’s washtub. 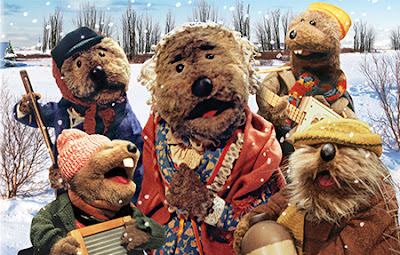 Back at home, Ma too hears about the talent show and dreams of buying Emmet a guitar with the prize money. However, she needs a new outfit to sing in; the trouble is, she doesn’t have anything left to hock – except Emmet’s tools, which he inherited from his dead father.

A rambling pack of miscreants attacks a local music store. They smoke cigarettes and love rock and roll. They’re a pack of bad dudes. There’s even a fish.

The allure of the prize money is too much for Emmet and his mother. They each go behind one another’s backs in an effort to win the talent show. Emmet joins the jug band, and Ma gets her fabric, washtub and tool kit be damned. The Jug band is pretty good, and Ma is focused. They all arrive at the talent show, ready to do their best, only both acts lose because the rock and roll wild boys are now a band called The Nightmare and whip out some killer late 70’s hard rock. Does losing the talent show ruin Emmet’s Christmas? You’ll need to watch to find out.

Emmet Otter’s Jug Band Christmas works because it’s almost like the anti-Christmas movie: the neighbors are all out on the grind, Emmet and Ma have the death of Pa hanging over everything, as they continually bring it up, and the songs are weird but awesome. They even sing about BBQ. The Otter family does get screwed over by some local towns ladies, which doesn’t ruin their days, but indeed sucks.

What’s cool about this movie is that Emmet Otter pre-dates a lot of the tropes found in the later Muppets. The story has darker threads and doesn’t rely on sight gags or inside jokes from the Muppet world; The tale keeps Emmet Otter going, not a cameo from Gonzo.

Unlike The Christmas Toy, which is an easily beloved Christmas classic, Emmet Otter and his furry friends live by their wits and sometimes, by their whiskers.

If you’re looking for a new Christmas flick that’s worth watching, give ol’ Emmet a spin. It’s got everything you could ever need in a Christmas movie: fuzzy little otters secretly making terrible life choices, a bullfrog mayor and a hole in the washtub.  This cult classic has heart. The songs are catchy as hell and let’s be honest; The Nightmare deserved to win the talent show, fair and square.