"That's what!" (5 stars) – It speaks for itself. They're Rascal Flatts. Enough said.
by llbnchs

"Love it" (5 stars) – I believe this is a song Gary wrote and I just love it. The guys just keep the hits coming. It makes you realize what life is really all about and that these guys are still norma guys and love their families but their fans as well. Definitely worth the 99 cents. I would pay more if it costed more.
by Caitlyn8390

The fourth preview single released on iTunes from Rascal Flatts' upcoming "Relentless" is is a tedious tune that lacks the harmony-driven emotional bang or sugary confection of the few RF songs I'd count as guilty pleasures. I'd go as far as to say it's hookless... and hooks are usually the boys' strong suit, along with fashion and whining. "Things That Matter" consists of a couple of mini-stories about how little things get in the way of what is truly important in life. That's a fine sentiment, but the track tries way too hard to be timeless and moving while being utterly forgettable, due to the shallow emotional development in the sketch-like stories, and only moving enough to transport my Cliff Bar from lunch the wrong direction in my digestive tract. In the bridge, Gary says regret won't be all up in his business at the end of his well-primped days and he won't be asking "Why didn't I?" I felt quite the opposite about the last 4:41 of my life. The song in summary: Somebody doesn't stop and smell the roses enough because they're buried under a pile of crap in the inbox.... somebody else lets past wrongs get in the way of what could have been a rewarding relationship... somebody dies (didn't see that coming did you?).... somebody learns a lesson from the aforementioned. There ya go.

One more thing: An extended musical tag???? Isn't that like Willie Aybar coming back out of the dugout to tip his hat and bow proudly to the Tropicana Field crowd after driving in one run on a sacrifice fly in a game where the Rays were down by 4? 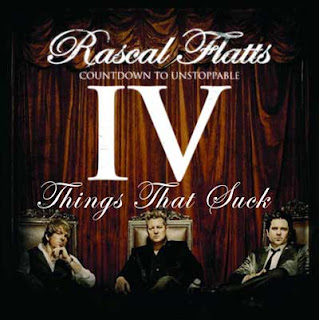 Star Power
The latest nonsense from Farcer at 8:26 PM