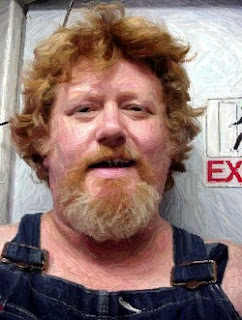 Local man Reginald Spears was removed, bloodied and battered by security and local officers, after refusing to leave the premises of WTSM Catfish 104.9 on Monday afternoon.

Spears showed up at the front desk of the station around 2:15 in the afternoon, holding two large donut boxes. When Spears said he'd brought some goodies, and asked to see the "head fool in charge," receptionist Lora Nickles suggested he make an appointment. Mr. Spears indicated that he was a busy man and needed to see new manager Anthony Sparks immediately (though he used much more colorful language). When Nickles threatened to call security, Spears pulled a megaphone out of one of the boxes and began to yell "Stop lying to listeners, Catfish!" and "Sam Hunt is a pop singer!"

When Sparks came up from his office to intervene, Spears opened the other donut box to reveal that it was full of foul smelling chitlins. "See, I can lie too!" Spears hollered.

Security attempted to get Mr. Spears to leave without confrontation, but he sat down on the pleather couch in the waiting area and continued his tirade. While the man never threatened anyone or became violent, it still took the 2 security officers and 4 local police officers to roughly drag Spears out into the parking lot. He refused treatment for several contusions and a bleeding lip.

Several DJs appeared to be crying and shaking in the hallway after the scary scene. "He could have had a bomb or anything, but it was almost worse - he was being a closed-minded hater!" whimpered popular morning show host Alford "All Star" Hinds.

"This is an upsetting event to all of us here at Catfish," Sparks said, "It was the first time several of our on-air personalities had ever heard that Sam Hunt wasn't country; we're having a couple of counselors brought in tomorrow morning."

Deputy William Cranston said that Spears, an infamous ne'er-do-well and country music "vigilante," would not be charged at this time, as long as he vowed to stay 100 yards from radio station premises. "He didn't hurt anybody or destroy anything this time; he may be finally mellowing out," laughed Cranston.

"In my younger days, I'd be back up in this b**ch with a backhoe and some rope, but I'm more mature now and I'm also still on probation; I'll just talk sh** about them online." said a still red-faced Spears as he climbed into his wife's car.

As they drove away, Spears rolled the window down and yelled "Look for me on Twitter, I'm kinda famous, I was on Kimmel a couple of times!"
The latest nonsense from Farcer at 9:00 AM