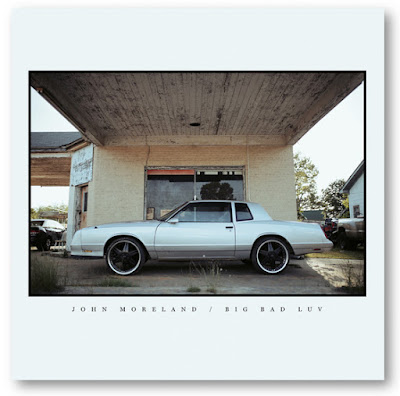 The first thing I noticed about the latest album from John Moreland was the generally positive and upbeat tint to the album.  Where other Moreland albums burn and singe their ways into your soul, this album boogies its way in.  That isn't to say that this particular outing from John Moreland doesn't have those same gut-punch moments.  It does.  The man writes songs that are written, it seems, in the dead of night with not a lot going on- just your thoughts either haunting or taunting you.

The next thing I noticed was just how damn soulful and bluesy Big Bad Luv is.  I know that's always been there with Moreland, but on this album it's much more pronounced.  The album is such a throwback Americana album to me.  It's something that Steve Earle would have put out.  There's a hint of Full Moon Fever-era Tom Petty.  It's an album that will certainly grow as the Summer heat begins to intensify.  The laid-back bluesy songs such as "Love Is Not An Answer" or "Salisaw Blue" are perfect soundtracks to Summer.

So, the album is a damn good album.  It's a growth even if it, in reality, is a step backward for Moreland.  Sure, his last two albums were more somber in tone, but those weren't his first albums.  He's always had bands and this album is more or less a return to those earlier days.  I think that this is an artist who is happy, who is comfortable with the artist he is, and has found a group of musicians that has helped him realize his vision.

Let me get back to the positivity for a moment.  Yeah, there are some crushing lines on the album ("If we don't bleed, it don't feel like a song"), but those feelings of despair are mostly in the past and nearly every song has a moment of clarity for Moreland, acknowledging his love has more than made him happy- she's made him better.  He's a married man now, and that new truth colors his new music.

Yeah, there's a lot to think about in our pasts, but sometimes we get lucky and we have someone come along who makes those past experiences seem worth it.  Those experiences led us to this point.  And, it's not so much dwelling on those past experiences.  It's more acknowledging them.  That's always been Moreland's strength; turning a sharp, unblinking eye on those pasts and the feelings they conjure late at night.  He makes us confront what we may have been disregarding.  That's what makes us love him and his songs.

Every John Moreland album always ends up being one of my favorite albums of the year, and I don't see a way this album won't also be in my favorite albums list.  If not at the top, then damn near it.  If you've never seen the man live, he's going on an extensive tour this Summer and you should do all in your power to get out and see and support him.  The show is unreal.  It's stunning.  While you're there, or before, pick up Big Bad Luv and all the previous albums if you don't already have them.


-----
Big Bad Luv is available everywhere you consume music, except like, Walmart probably.
The latest nonsense from Farcer at 10:30 AM