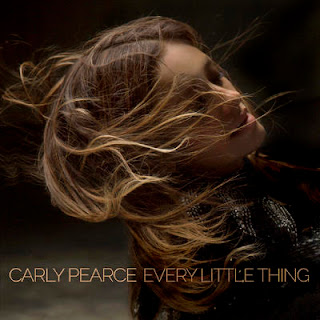 Off on the latest round of Bobby Bones's Funny and Alone tour, Carly is the latest new hot 'girl singer' or, as they are now called, Anyone But Carrie.

It is quite horrific that Carly has entered the charts with this song and, excluding boy-girl duets (Craving You, Speak to a Girl, The Fighter) sits alongside only THREE (tres) other women singing on their own: Kelsea, Maren, RaeLynn. Carly made this point on social media. It'll change, but maybe not in Willie Nelson's lifetime.

At least Carly, on Big Machine, has bucks and Borchetta (that’s a songtitle…) behind her. The big marketing push must centre on her experience singing at Dollywood, but there’s less Dolly in here and more Crystal Gayle, a pretty and pure voice that will certainly leap out on the radio among our friends [insert least favourite act].

There are so few great female voices from the post-Shania era: Taylor obviously but she’s a writer first and a singer second, Karen and Kimberly, Hilary, Maren, Miranda (more attitude than beauty, and that IS just the voice), Angaleena and Ashley, the other Pistol Annies...Then Carrie obviously, Kelsea who is fun [editor's note: NOPE], RaeLynn who has The Voice, and now Carly. Being uncharitable, I could say Cam is on the line and wants her burning house back.

I love, as I am sure you will, the twang of the dobro (I think it’s a dobro). The song opens with a sense impression: ‘the scent that you left on the pillow, the sound of your heartbeat’. In fact, Carly remembers everything, ‘the shine, the stain’, but she has now turned her back on the guy. Then, as often happens, the last verse flips the narrative: ‘I’d die to not remember every little thing’. What a super song.

Every Little Thing fits the template of Maren Country (can I coin that?): confident, tender, beautiful (the song AND the act), traditional with lots of contemporary edge. Sounds like a hit.