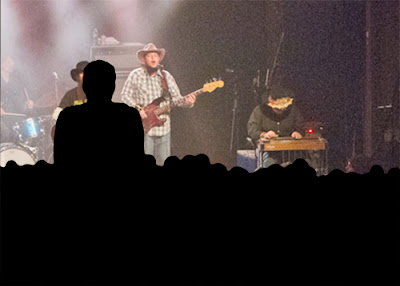 6'8" music fan Chet Parks was assaulted after a Cody Jinks concert last Thursday night in an incident that was surely unrelated to the fact that he obliviously blocks the view of fans who are of average or below average height at shows.

Parks, a Ridgeland, MS resident had just enjoyed an evening of drinking beer, hollering, and standing in front of other concert-goers who couldn't move or see around him, when the crime occurred. When he exited the venue alone at around 11 pm, a group of 3 or 4 individuals drug him behind a dumpster and pummeled him for several minutes. Parks said he didn't get a good look at his attackers, but that they were all white males between 5'6" and 5'11." Their heights may be important in identifying the perpetrators, but it most likely had little or nothing to do with the fracas.

"One of them shouted 'I missed the whole encore because of you' as he was kicking me in the shin." said a distressed Parks, who believes the shorter assailant must have seen Chet talking to his girlfriend, starting a spat between the two that caused him to miss the end of the show. It definitely, for sure, was not in response to Parks blocking his and 20 other fans' views of the stage.

In recent months, Mr. Parks has attended several other live rock, pop, and country shows without any major disturbances whatsoever, except for a keyed car and a beer bottle hitting him in the head, and another keyed car. Again, in all likelihood, these were just coincidences and not the results of his massive frame heedlessly blocking the view for around 321 music fans in total.

"You mean that guy who was so big that he blocked out all light and sound behind him and he never even pretended to notice another soul standing in his presence?" asked another Jinks concert goer. "Nah, I doubt that's why he got jacked."

At press time, police are not even looking into the matter after viewing security footage of Parks' eclipsing nearly 1/8 of the stage at the concert. "It wasn't life-threatening. He's a big boy; he'll heal up" laughed detective Laurence Porter.
The latest nonsense from Farcer at 9:00 AM