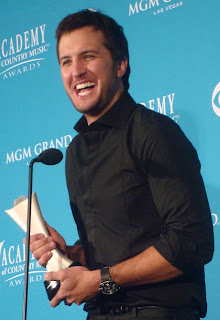 In a recent interview with Bobby Bones, country superstar Luke Bryan revealed that he is no longer wearing his signature skinny jeans, instead opting for a bit looser fit. Bryan expressed a weariness over reactions to his tight fitting denim, saying that his shows were for music and entertainment, not just shaking his backside.

Upon learning of this shift in Luke Bryan's wardrobe, cult favorite satire website Farce the Music announced that it will cease operations. Farce the Music, known for skewering the tropes and trends of mainstream country music, will close up shop effective immediately according to owner "Trailer."

"Well, we had a good run," smiled Trailer. "I always knew this day would come, though; no more gonad grinders." Trailer, last name Parkman, admitted that with the site's one good joke source gone, there was little choice in the matter.

In publication for 9 years, Farce the Music made a name for itself with memes, bad Photoshop, negative reviews, and the occasional promotion of music it deemed of quality. Over that time, it made sport of singers like Sam Hunt and Florida-Georgia Line, but Luke's skin-tight pants were always the central focus. With the "butt of the jokes" gone forever, FTM's relatively small but dedicated audience will have to entertain itself now.

"I mean, what's funnier than a grown man who claims to be a country singer dancing around on stage in nut huggers?" laughed Parkman. "I had come up with approximately 1,496 different ways to make fun of his sack squooshers, enough to go years into the future, and now those jokes are no longer relevant. It's a sad day."

While critics of Farce and even some fans grew tired of the constant barrage of quips and fake pictures about Bryan's "cojones crushers" or "fruit flatteners," Trailer never seemed to run out of silly synonyms and misappropriating memes. It was a little creepy, to be honest.

When asked about his future plans after Farce the Music's final bow, Parkman wiped a tear from his eye and said "...watching wrestling and whining about fantasy football, I guess. Like any other well-adjusted adult."

#fakenews
The latest nonsense from Farcer at 11:30 AM