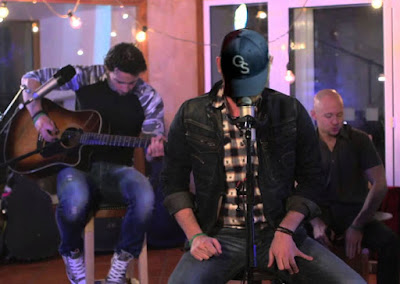 Country superstar Cole Swindell recently fell asleep during a Cole Swindell concert. The "Chillin' It" singer, currently on his Down Home acoustic tour in support of his annual Down Home Sessions EP, dozed off during an extended guitar solo on his hit "Ain't Worth The Whiskey."

Bassist Adam Cunningham noticed Swindell dropping his head a few times during the middle of the concert, but only noticed that the vocalist had actually dozed off when he started swaying on his stool in an atypically rhythmic manner. "I jogged over to him and nudged him and he just about fell," related Cunningham, stifling his own yawn.

"That concert was so monotonous." explained Cole. "The songs didn't say anything and most of them sounded the same… and the singer was flat. The musicians did their best with the material but heck, Michael Jordan would've sucked if he'd had to dribble a football."

The consummate professional, Swindell was able to shake off the cobwebs and tediously finish the last three songs, before collapsing into a pile of curtains backstage to finish his siesta.

"It's a good thing Adam was there when I nodded off," laughed Swindell. "Or I'd have been all over YouTube the next day. I mean, honestly, it would have been the most exciting thing to ever happen at one of my shows."

The Down Home Tour, which provides nap pallets and blankets in the back for sleepy fans, rolls into Chicago tonight and continues into the spring, when Swindell will begin his first major headlining tour.
The latest nonsense from Farcer at 9:00 AM