Dad Was Under The Impression There'd Be Country Music 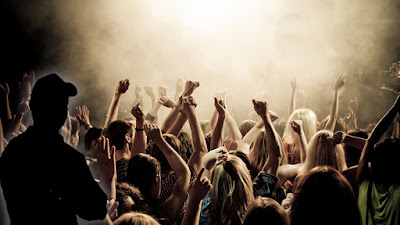 Dad Mark Benson, 47, of Taylortown, Louisiana took his daughter and two of her friends to a concert at the Bossier City Centurylink Center assuming there'd be country music. After all, the main guy was wearing a cowboy hat on the poster, and the two opening acts had the same last names as people from his church. And the local radio station had promoted "One Big Night of Country" for the last 2 months, but so far Mr. Benson had heard nary a note of country.

Clad in camo cargo shorts, a Flori-Bama t-shirt, and white & red New Balance shoes, Mark stood incredulous at the barrage of beats and other sounds which couldn't possibly have come from the guys holding instruments on stage. The performers pranced around the stage exhorting the audience to "keep it lit" and "put your drinks in the air" while mumble-singing mid-tempo pop songs that all seemed to run together.

Besides a couple of drawled phrases and constant references to beer, there was nothing in the first hour and a half of the show that might have indicated what genre of music these singers claimed to be. He's pretty sure he's heard that song from the one guy about "leaving the bar with me" on the country station, or maybe the one from that other guy about "leaving the bar with her," but he wouldn't put money on either one.

Now, 4 songs into the headliner, Mark and other goatee-having fathers are glancing at each other with confused looks. The tall, handsome singer seems like a nice young fellow, but he's yet to twang a note. There's no steel guitar on the stage. There's no fiddle player. There's no banjo. There haven't been any cheating songs.

"Get off my lawn" and "music was better back in my day" swirl through Mark's head, but he doesn't dare utter those phrases into existence. His daughter and friends seem to be having fun watching the show through their phone screens and he's into his 6th Fat Tire tallboy, so things could be worse.

No wait, the headliner is rapping now.