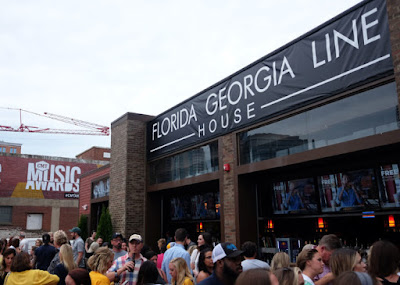 Kayla Marks recently tried online dating for the first time, and it was going well so far. Was. The first date with Steven was surprisingly fun, just dinner and a movie and a peck on the cheek goodnight. The second date was a bar crawl with another couple, and it was silly and memorable.

Steven had seemed like a potential long-term interest. He was attractive, funny, had a good job, sensible car, good taste in movies, and seemed well-read. But this. This was a problem.

Sitting at the lower bar of the FGL House, waiting on a table, while "This is How We Roll" boomed from the speakers overhead and way too much neon stirred the opening pangs of a headache, Kayla saw a red flag. And then another. And then another.

While she put on a happy front, her head was full of concerns.
"We live in the area, we're not tourists; why would we go here?"
"Do these damn bachelorettes have to holler so much?"
"Does he like Florida-Georgia Line? Ew."
"He's scarfing down those jalapeno poppers like a caveman."
"Glad I'm not paying. $15 for a cocktail?"
"Did he really just say he hasn't called his mom in weeks?"
"Damn it, Maddessyn, we get it… the penis shaped balloon your maid of honor just put on your head is hilarious. Shut up already!"

And it didn't stop there. Suddenly Kayla was seeing every flaw and downplaying every strength she'd seen in Steven.

Yeah his job was pretty good, but he worked for his dad, selling toilet parts. Toilet parts?

The perfect teeth? Maybe he was one of those people who organizes his socks.

And he said he reads a lot. I'm guessing Maxim. Does that still exist?

And why hadn't he talked to his mom since April? Does she also hate his taste in music?

She'd overlooked the fact that he'd had pop country playing in the car on all three dates. She figured it was just habit, or that he'd just left it on there as background noise, but now she knew the cold hard truth. He actually enjoyed the mindless, sexist, cookie-cutter drivel. And if so, Steven must surely have other disagreeable characteristics.

Suddenly her deep thoughts were interrupted by Steven loudly rapping along with the Future song now playing, then, "Hey our table's ready… I got us some Fireball shooters."