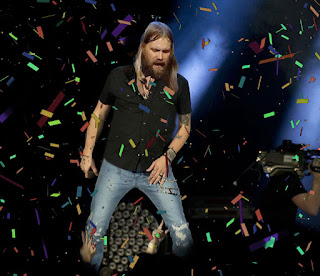 At past shows, Stapleton simply walked out with his band to start the show, but tonight he exploded out of the stage with pyro and concussion bombs. "What up? Y'all ready to get this party started?!" hollered the bearded troubadour, and the crowd ate it up.

"Well, throw your hands in the air and let's do this damn thing!" he shouted, pacing the stage to the cadence of a piped-in trap beat. Explosions rocked the stage, and fire shot from the mouths of metal scarecrows at the sides. Chris then launched into Thomas Rhett's Stapleton-penned smash, "Crash and Burn."

While some in attendance seemed confused at the new Chris Stapleton, the rest of the crowd lost their minds. No longer standing behind a mic with guitar in hand, the singer danced and jaunted across the glittery stage, mimicking the steps Rhett performed in the song's video. He never missed a note as he whipped the fans into a frenzy.

Next, Stapleton's band started into the bouncy Rascal Flatts album cut "Vandalized," Chris saying "Y'all might not have heard this song but my homies Gary Levox and the crew killed it and I'm proud to do my own take of my song tonight!" The re-imagined version amped up the bass and Chris actually rapped most of the verses. It was shocking to hear the traditionalist favorite dropping bars, but he was surprisingly adept.

The bulk of the rest of the show was songs from Chris' three album releases, but many of them were rocked-up renditions with producer and guitarist Dave Cobb showing off his shredding chops. During a power ballad take on "Fire Away," the entire band stood side by side as a backing track played and did the old 80s hair metal synchronized head bang. Confetti cannons blasted the crowd as Stapleton hit the final chorus.

For the encore, Luke Bryan's hit "Drink a Beer" (also written by Stapleton), Chris asked a couple in the audience to throw him a couple of tall boys. They complied and he caught them both and smashed them above his head, pouring the Coors Light into his mouth like former WWE superstar, Stone Cold Steve Austin. The crowd popped huge. It was an exciting end to this impressive showcase of Stapleton's new direction.

When reached for comment after the show about the huge shift in vibe and persona, Stapleton told us "Cheryl in Topeka said on Twitter that I didn't deserve a nomination for Entertainer of the Year because I'm so boring. Well, that didn't sit well with me, so from now on we're taking it to the next level, keeping it lit, and burning the f**king house down every night."

Stapleton doesn't perform again until September 22, and it will be interesting to see how the Farm Aid crowd responds to his hip new high-octane show.