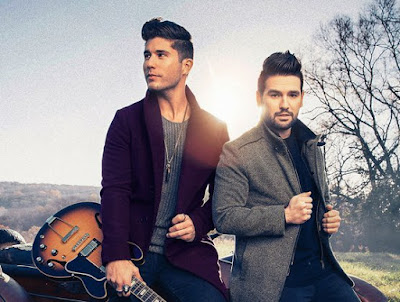 Hit pop-country duo Dan + Shay spent Thursday night in the clink after a violent fight at a Detroit Lakes, MN bar. The group's management declined to bail them out until this morning because, according to inside sources, "they refused our suggestion that they not go in there and get into trouble."

At least 5 people were treated for injuries onsite and 1 went to the hospital after the massive brawl. Dan Smyers and Shay Mooney both declined treatment for minor facial bruises.

Dan and Shay had just played the WE Fest country music festival and were headed to their next stop, when the two pleaded with their driver to stop at Bunghole Pete's. Against the wishes of their management and the stern warnings of their band and crew (who were too scared to enter the sketchy dive), the two piled off the bus for a few cold ones.

One witness, Karl Heidenreich, said that as soon as the pair grabbed a spot at the bar, guys in the establishment were wolf-whistling them and throwing peanuts in their direction. "They was wee tiny little fellas." said Karl, "And they was dressed like Scottish golf instructors… we don't get their kind in Pete's very often."

Karl says a large biker from the Hellstrykers MC walked up to Mooney and said he was cute and asked him for a date. "I say live and let live, but them bikers thought those two was [sways hand back and forth] or whatever." Karl went on, "I didn't think it was real nice to pick at 'em, but then, I didn't think them little Smurf looking boys ought to have come in here either."

What happened next shocked Karl, and ended with Smyers and Mooney spending the night on cots at the Detroit Lakes city jail.

"That adorable little man had that huge biker on the floor in a triangle choke before I could exhale my Black & Mild." laughed Heidenreich. "Another Stryker I know named Bukk Jameson tried to punch (Smyers) and ended up with a glass ashtray across his teeth. Them kids could go, man!"

Bartender Max Umbridge described the rest of the wild scene, telling us nearly $7,000 dollars damage was done to Bunghole Pete's. "The short one, wait they's both short I think… anyway, he put Bukk through a table with a modified powerbomb, and all hell broke loose." said Umbridge.

Fists flew for nearly 20 minutes. One man suffered a broken leg when Mooney applied the Texas cloverleaf on top of a pool table. Another was beaten unconscious in the ladies room by Smyers before the cops finally arrived.

Dan and Shay are due in court next week for a preliminary hearing on charges of disorderly conduct, property damage, and mayhem. The Hellstrykers declined to press their own charges and, in fact, that's a made up name, because the actual M.C. said FTM was not to use their actual names under threat of violence because they were so embarrassed.

At press time, Dan + Shay was headed to Maryland Heights, MO for the next show on their tour supporting Rascal Flatts.