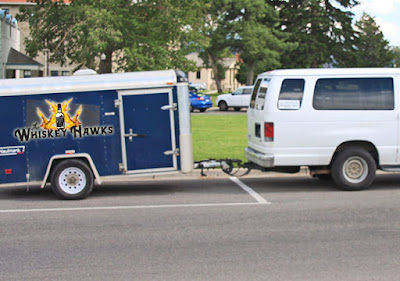 by Trailer - Originally posted on Country California, Tuesday, June 17, 2014
A popular roots rock band is not starting a Kickstarter page to defray the costs of a white 1998 Ford E-350 van and Pro-Line trailer with the band's logo on the side and $1700 in musical gear, which were quite shockingly not stolen after a recent Houston area gig.

The Whiskey Hawks, of High Point, North Carolina, had just finished up their supporting set for Jason Boland at Dosey Doe in The Woodlands and ducked out a bit early. "We'd seen Jason and the guys a few times before and hung out some, and we were hungry, so we left around 9:30 for Waffle House," said drummer Gus Pounds. "And that's when it happened."

Members of the four-piece Americana/punk/folk outfit were shocked by what they discovered. "I thought maybe the scattered-and-covered I'd had was messing with my head," explained lead singer Aaron Lavox, "but our van and trailer were still right there where we parked them."

Police were not called to the scene of the un-stolen touring vehicle and 'drunken hawk' emblazoned instrument carrier, and aside from a small hole in a denim vest caused by an unextinguished American Spirit cigarette, no damage was reported.

"I'm happy, you know, but I'm just thinking the whole time... is our stuff not good enough for you?" bassist James Squier wondered as he groomed his immaculate beard. "Even the cajon was still there ...what, nobody wanted that for an end table?"

At press time, the Whiskey Hawks were contemplating a PledgeMusic campaign to fund an upcoming six-song covers EP of obscure Bellamy Brothers songs.