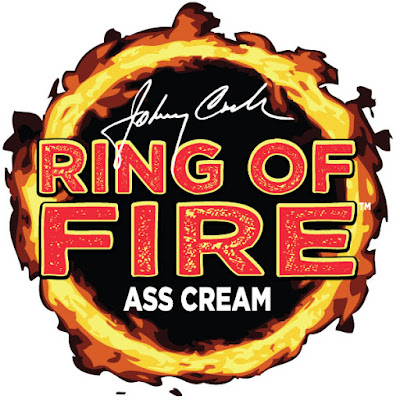 "Johnny Cash's Ring of Fire Ass Cream" will begin production in June with expected shipment to Fred's Dollar Stores across America by the ass-itchingly hot month of August. "This is an exciting new application for the Johnny Cash name and we feel that it will reach an area that hasn't been reached before" smiled John Carter.

The television advertising campaign will include actual footage of Johnny and June performing "Ring of Fire" in a humorous spot where Johnny leaves the stage suddenly to use the product because his ass hurts. Computer animation will manipulate Johnny's mouth to say "Woo-wee! That's good ass cream!"

Some country music historians and Cash fans have criticized the move harshly, calling it gross commercialism and flagrant mismanagement of Cash's image and legacy. For his part, John Carter sees it as a strategic move to expand his late father's influence: "Not everybody's into country music, but everybody's ass gets itchy or painful, so this will allow people in all walks of life to experience the Man in Black."

News of "Johnny Cash's Ring of Fire Ass Cream" follows last month's release of an album of hip-hop remixes of Cash songs, which was also said by many to be an "ass" product.