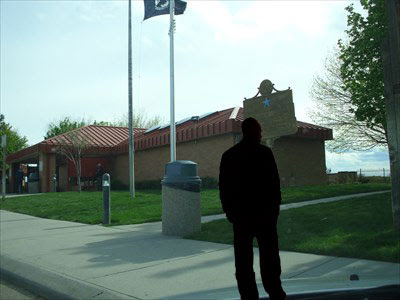 Americana cajon player Jeff Coffee is stranded in Missouri. Formerly (?) with the band Beard Harvest, Coffee was left behind at a rest stop after a show in Cape Girardeau 8 months ago, and to date has not heard from a single member of the band.

From the moment the band’s Econoline pulled away from the Fruitland southbound rest stop on February 25th, Coffee was completely abandoned. “I don’t have any of those guys’ phone numbers,” he frowned. “Not even the bass player…. So I couldn’t call anybody to come back and get me; I just assumed they’d notice by the time they hit the Arkansas line at least.”

Sadly, the up-and-coming roots rock group’s van never returned. Jeff, for his part, has moved on with his life, starting from scratch in the small river town. “I slept behind the Coke machines that night; damn it was cold,” he related. “But by the end of the next day I already had a job at the quick stop and a cot behind the beer cave.”

Coffee has since put his college degree in education to use, getting a job as a music teacher at the middle school, and is even dating. “I know - it’s a bizarre story - one of the key members of a rising band just left in the middle of nowhere and starts a brand new life.” he smiled. When asked if he’s kept up with Beard Harvest in recent months, he just shakes his head solemnly. “I really don’t know how they’ve made it without me, I hope they’re doing well.”

When contacted on their brand new tour bus before the first night of their 3 sold out Ryman performances, Beard Harvest lead singer Conn Whitaker asked “Who?” regarding the cast-off percussionist.  “I didn’t know we had a full time cajon player; we’ve just been getting a random fan to play at shows - it’s not like it’s hard.”