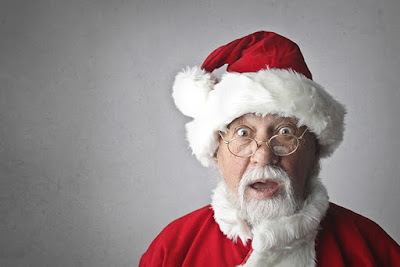 Kris Kringle, aka Santa Claus, usually stays out of the public eye, rarely granting interviews or making public statements. Sure, his legion of helpers is out in force this time of year, taking Christmas requests in mall courtyards and smiling with crying kids on their laps, but the man himself is busy and reclusive. Therefore, his press release this year came as quite a surprise.

We won’t post the release, but the gist of it was Santa asking Kane Brown fans to leave a voice mail of their Christmas desires rather than send letters this year. His message was direct but polite, never giving the specific reasoning behind his request, only that “these old eyes have a little trouble reading your writing.”

However, we’ve received word from an inside source that Santa’s missive was related to the undecipherable nature of the letters he received from members of the fanbase in recent years. “They looked like they were written by cavemen,” said an anonymous North Pole worker who asked us to refer to him as Toony. “Santa was all understanding and diplomatic like some fat Mr. Rogers, but I’m just gonna say those people are stupid as hell.”

Toony sent a jpeg of one letter that started “Deer Satan” written in hunting face-paint on a paper towel. Though the rest of the note was difficult to translate, it appeared the young man wanted either the game Modern Warfare or something to do with ‘model whores.’ Either request seems just as likely.

“Last year we just gave them all non-gender specific clothing and gift cards to save time because 90% of them were just scribbles and gibberish,” said Toony. “And a surprising amount of them came from prisons, or maybe not that surprising now that I’m thinking about it.”

Toony told us the voice messaging option was going fairly well so far, mostly thanks to technology. An AI listening system has been installed to take the calls and is doing an impressive job translating the yawps and grunts of the Kane Brown fans into gift requests, but he says the letters are still a running joke at Santa’s toy shop, passed around frequently by the elves.

“One of them was clearly written in sidewalk chalk on the inside of a Playboy magazine cover,” laughed Toony. “It was obviously smeared beyond readability, but I did make out something about ‘booty shorts’…ho ho ho indeed.”