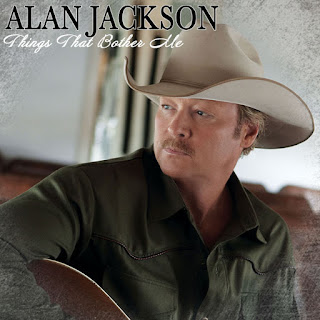 Country legend Alan Jackson takes his time putting out new music these days, but he’s gearing up for a surprising new release. Due May 8th, Things That Bother Me, produced by Keith Stegall, will be a departure for the long, tall singer - a protest album - and we talked with him about this unique venture.

“The Long and Short of It,” the album’s opener tackles an issue near and dear to Jackson’s heart. “You don’t know how hard it is to find 38.5 inseam jeans without having to go on the computer,” frowned Jackson, “So this song’s about that.” The tune documents and dismisses the continued discrimination of the men’s clothing industry against men with very long legs. The anger in his voice is palpable as he sings: “I looked in the Target big & tall, but 36 is all they had.”

Jackson is twice as passionate on “As God Intended,” a gospel-tinged anthem about the proliferation of craft beers. “Why can’t people just enjoy a good Bud heavy like a normal American?” he puzzled, “They got IPAs, double IPAs, triplebocks, sours, and coffee stouts out the wazzoo. Makes it hard for me to just grab my sixer and go with all the granola boys hanging over the coolers looking at their phone apps for a beer rating or something.”

While never breeching the subjects of politics or social justice, Alan does get into a controversial subject on the album’s final cut, “Sissy Basketball.” While he only played church league ball as a younger man, Jackson still laments the evolution of the NBA from the grinding defensive struggles of the 80s and 90s to today’s high-scoring finesse game. “I miss the days of Bill Laimbeer and Charles Oakley literally assaulting somebody who thought they’d get an easy layup,” he laughed, “So this song’s about that.”

When asked if he thinks the confrontational tone of the album will turn off long time fans, Mr. Jackson simply stated “I don’t reckon.”