Florida-Georgia Line Vows to Stay Together for the Kids* *money 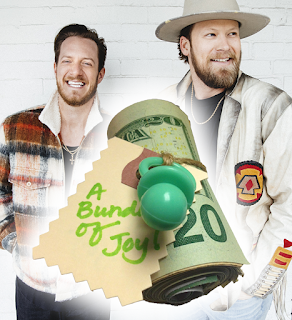 Florida-Georgia Line revealed Tuesday that they had recently attended several sessions of couples’ therapy in hopes of healing their strained relationship. Several months of political disagreements played out publicly on social media during the recent Presidential election, and it seemed all was lost for the duo.

Happily for the fans, it seems things are looking up. “We’re all good now,” said Tyler Hubbard. “There were some tough days there, like you have in every relationship, but I think we’ve found a common goal and reason to stay together: we love the sweet money that we made together.”

“Little Benjamin would be so upset if we broke up,” said Brian Kelley. “And Ulysses… it’d tear his tiny heart in two.” Kelly went on to say that while there were still differences in he and Hubbard’s business-marriage, doing the right thing made it much easier to maintain the alliance.

The happy couple plans to continue therapy for the foreseeable future, but feel certain they have turned the corner on their disagreements. “If Ty starts talking all his Demoncrat nonsense, I’ve been given some coping strategies to block him out and focus on my sweet little green babies.” smiled Kelley.

“And if he says one more damn word about election fraud… no no no… breathe… moolah, cheddar, bucks…” said Hubbard, reciting the nicknames of his children to himself to remember what makes his current journey worth it.

At press time, Hubbard was crying while singing a lullaby to one of his bank statements.