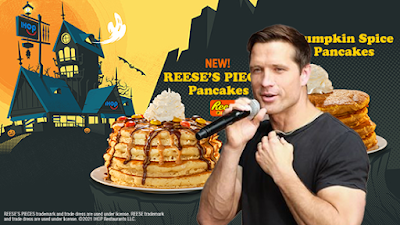 After taking over TikTok, country radio, and television ads, pop-country-talk-singer Walker Hayes has something new on his plate: another foray into the advertising world. This time around he’s extolling the virtues of IHOP (formerly International House of Pancakes), in a spectacularly stupid and catchy jingle/single that’s debuting on TikTok next week.

Hayes, the co-writer/singer of the smash-hit, brain-numbing, infuriating ode-to-the-simple life, “Fancy Like,” got to work on the new song, simply titled “IHOP” as soon as Applebee’s launched its ad campaign with the former. “We’re putting the finishing touches on the dance,” said Hayes. “I can just see a line of people dressed as breakfast burritos popping and locking in the commercial! Literally everyone will love it and if they don’t, I’ll make snarky comments to them on Twitter.”

Dine Brands Global, who owns Applebee’s as well as IHOP, had already optioned the song, music unheard, and prepped for ad shoots in the coming weeks. EVP of Marketing, Tenise Helms told us “Walker has been a goldmine for Applebee’s, and I’m sure he’ll be the same for IHOP, and that no one will in any way find this song to be exasperating or irksome. If you don’t like Walker, you don’t like fun!”

Traditional country fans and people who only watch TV during football games had a drastically different reaction to the news. “God ******* **** it!” yelled LSU fan Peter Grady of Baton Rouge. “I already went to therapy for the first time because of that ‘fancy like Applebee’s’ bull****; please tell me this is a ****ing joke.”

“Walker Hayes, who’s she?” asked country fan Carl Outlaw. “Oh that Applebee’s ad… I’ll shoot my TV if I have to hear him on a mother****ing IHOP commercial too!”

Here are a sampling of the lyrics for “IHOP”:

Eat till I pop

At press time, America really wanted Walker Hayes to just stop and go spend some time at home with his family.