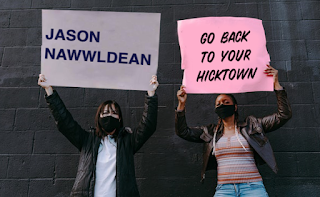 A mob of unruly woke folks staged a protest in front of country singer Jason Aldean’s record company yesterday. They were clearly upset that Aldean had recently been using his 1st amendment rights to criticize President Joe Biden, speak out against mask mandates, and generally promote all sorts of dangerous freedom.

The blue haired and heavily masked troupe staged their protest on Grand Avenue beside the building that houses the office of Broken Bow Music Group, snarling the already terrible traffic near the intersection with Music Square West.

“We’re here to demand Aldean’s immediate dismissal from the label, and to show our disdain for his very existence.” said Rachel Portnoy, a community developer from Hackensack.

On cue, a short convoy of Nissan Leafs, Toyota Priuses, and Chevy Volts proceeded down Grand in Portnoy’s direction. She and an assistant, Pierre Effete, stepped off the curb carrying large boxes of Jason Aldean CDs. They dumped the albums directly into the path of the environmentally responsible parade and stood back as the cars crushed them into a pile of acrylic, polycarbonate, metallic film, and torn album liners. One Leaf became stuck in the pile and had to be pushed out by protestors some workers from across the street.

Formerly quiet on the subject of politics, superstar Aldean has recently been more outspoken, cheering on audiences for flouting mask mandates, allowing his children to be photographed in “Hidin’ from Biden” t-shirts, and defending his wife’s sale of said shirts (among other more forcefully worded shirts). “We’re just fed up with his inflammatory speech; while we support responsible free speech, people who disagree with our particular viewpoints clearly cannot handle the freedom.” said Effete, a barista from Belle Meade.

When told that the protest might be bringing previously unknown awareness of Aldean’s politics to a segment of people who’d likely become fans because of those beliefs, Portnoy seemed dismissive. “If this does nothing besides trend on Twitter for 2 hours and improve our cred inside our bubble of influence, then we’ve done our job,” she smirked.

Over on the sidewalk, Pierre attempted to snap an Aldean CD in half with his bare hands, but was unable to break the disc and simply threw it to the concrete before picking it up and placing the pieces in the recycling bin.