In no particular order.

The Honeycutters - Me Oh My


These and many other good songs from 2015 are included on this Spotify playlist: 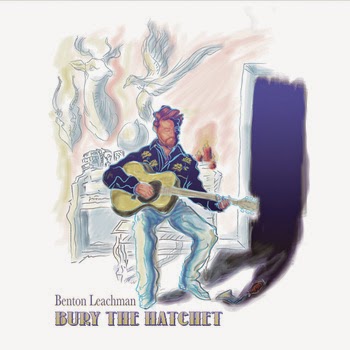 Benton Leachman has a reedy croon that gives off the impression of innocence or sweetness. While that may indeed be the case for Leachman personally, his debut album, Bury the Hatchet, presents several bits of evidence that are at odds with that starry-eyed delivery. He's clearly a complicated and real person, and this record shows you all his sides with a passionate honesty that's rare in first releases.

Opener "Desire" is a bouncy country-rocker about modern dating - straddling that fine line between giving too much away while sharing just enough to keep a love interest …well, interested. "So maybe I’ll just get my feet wet first/Before I hold’em to the fire" sings Leachman late in the song, displaying a wariness that's both an armor and a sword.

The third track, "Pride," is a standout in the bunch, as catchy as it is insightful. It's a hopeful tune about trying to drop the selfish ways that make a relationship more about two hard-headed people than one committed couple. The very next song, and the title track, could well be what happens when that couple foregoes reconciliation and becomes irreparably frayed. "I'll bury this damn hatchet in your heart" is the first sign that Benton's lilting voice belies a sharp tongue, but further proof that he's not biting that tongue.

"Lonely" is my favorite song on Bury the Hatchet, highlighting Leachman's proclivity for a well turned melody and a layered story. The steel guitar gets a workout on this barroom lament that proves its protagonist an unreliable narrator who claims to be resolved in his brokenness but clearly is still fighting.

The biting wit reappears on "Cross to Bear" with the amazing opening lines:
"I think I hate you
And I want him dead
But I think I’ll take all this hurt
And I’ll just rhyme these words instead." Hot damn, that's some lyrical shade.

Closer "The Zombie Song" is either an Americana take on Michael Jackson's "Thriller," an acid trip, or a pondering of mortality. Whichever way you read it, it's a good tune and kind of a strange-ass way to end the album. Sonically, it fits the collection just fine, and based on some of the earlier lyrics, it's not entirely surprising… but still, an interesting way to draw the curtain.

Benton Leachman immediately proves himself a voice to be paid attention to on Bury the Hatchet. His vocal style certainly draws comparisons to Sean McConnell and Mando Saenz, but his unique inflections and hold-nothing-back songwriting brand him a singular and special artist. Bury the Hatchet is a heavy dose of medicine delivered with that spoonful of sweetness.

Bury the Hatchet is available as a digital download or a physical delivery at Leachman's Bandcamp page and also on iTunes.
The latest nonsense from Farcer at 9:00 AM 0 complaints