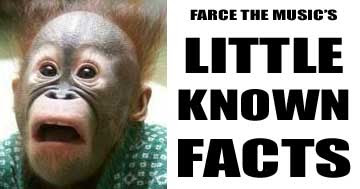 Taylor Swift is a ghost-writer on all of Kacey Musgraves' songs.

Dwight Yoakam was mentoring Luke Bryan's career at first, but Luke quit listening after the discussion on jeans.

Zac Brown's beanies are all lined with aluminum foil to prevent theft of these documents.

Every time you hear a truck song, a douchebag angel gets their wallet chain.

The over/under for Jana Kramer having to file a restraining order is 4.5 months.

Hunter Hayes could not.

Gary Levox could, if rights to a box of Little Debbies was on the line.

Steve Earle is not a Marxist. He finds Marx to be a little too moderate.

If George Strait's current 60 for 60 campaign fails, he plans to bite the head off a live bat at the next concert.
The latest nonsense from Farcer at 9:00 AM