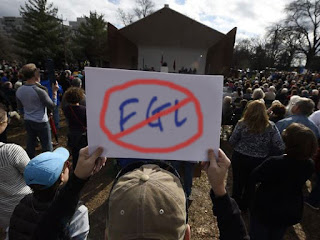 Despite growing differences of opinion on nearly every possible law, rule, belief, tradition, and moral, American citizens Tuesday proclaimed their mutual and unquestioned hatred of nu-country duo Florida-Georgia Line. Neither Donald Trump, nor border walls, nor gun control could divide a proud and patriotic populace as they uniformly decried Brian Kelley and Tyler Hubbard's insipid music.

Protests, hashtags, and boycotts marked the citizenry's disdain for the performers of such songs as "Sun Daze" and "This Is How We Roll" as social media and commerce ground to a crawl.

"We should deport them," shouted indignant, self-described liberal Leo Martz of Brooklyn. "I don't like the looks of that one guy who sings." Leo, who is fully supportive of globalization, open borders, and socialism, said he'd vote for any candidate in future elections who runs on a campaign of ridding the country of "those two miscreants."

Cathy James, a staunch Republican with "deplorable" in her Twitter handle, tweeted "Florida-Georgia Line is a worse plague on this country than illegal immigration. I'd join Black Lives Matter before I'd go to one of their concerts."

Nashville was the site of one large march which targeted Big Machine Records, the group's record label. Some of the signs in the angry multicultural crowd of over 150,000 read "My Body, My EARS!" "Cruise Your Ass Out of America" and "F*&% FGL!" Local authorities reported the arrests of three men who pulled a Florida-Georgia Line fan from his jacked up pickup truck and forced him to listen to Bob Dylan and Johnny Cash.

Father Luther Coleman of Nashville smiled broadly as he crushed a Dig Your Roots CD underfoot. "It's amazing to see people of all races, political parties, sexual orientations, and heights come together as one. Regardless of your faith or lack thereof, it is a beautiful and spiritual thing that we can all agree that Florida-Georgia Line really sucks."

By late afternoon, most Americans had returned to arguing on Facebook about bathroom legislation and Star Wars, but for a few hours we were reminded of the promise and potential of this great nation. God Bless America.
The latest nonsense from Farcer at 9:00 AM