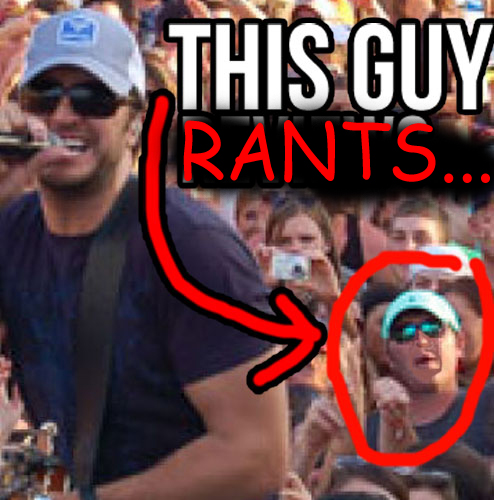 Listen, you must not be hearing my local country station cause I here chicks on their all the time. At least once every four hours they play one and it's to much if you asked me. They all have whiny voices and they don't sing about the stuff I like. I mean, I'm not a sexiest, but women are supposed to be pop singers like Britany Spears, and not sing about hard, gritty country stuff like trucks and punching dudes.

Onto Sam Hunt now. He is a country singer weather you like it our not. Just because your old like 37 or something and wish all country songs we're still about crying in a bear or divorcing your cheating skank, doesn't mean us younger people wanna here about that stuff. Sit your old ass down and listen to you're eight track tapes with Tammy McEntire or whoever. I'm a country fan and Sam Hunt sings about things I expereeyence every day of my life like house parties and doing chicks on backroads. Jealous past your prime jerks just shut up. I hate pop music so clearly Sam Hunt isn't pop. I know my shit.

All these arguments just get old. You say the same things over and over:

Like "Where's the steal guitar?"
LMAO, TF is that.

"Where's the fiddle?"
You talking bout a violin's redneck cousin, bro? Nobody wanna hear that mess.

"There just appealing to young girls?"
And? Long as my girl is happy and in the mood, I'll listen too what ever she likes. If she looking hot and wanna call a Motly Crew song country, she can do it and you can step son.

So in summery, your stupid if you think what they plays on the radio now isn't real country music. Would some body in a position of authartity lie? Of course not. If Hank Williams Junyer was still alive he'd be making party music like FGL, and you know he would.

Get TF out of here with your salty old crusty head ass. I'm out hear tryna get my drink on and just have a good time and that's what country radio wants me to have to. Next your going to tell me that Lil Yachty isn't real rap music.
The latest nonsense from Farcer at 10:30 AM