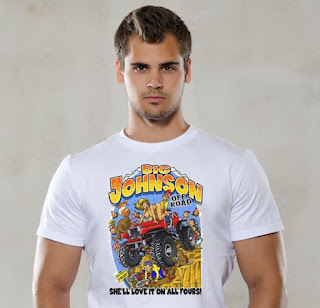 Mitchelson, whose repertoire also includes the songs "Sluts in My Truck," "Spread 'Em," and "T&A," is a 6'4", 230 lb specimen of a former junior college quarterback with a five o'clock shadow and a knack for writing what his fans want to hear. His musical style is best described as: listen to country radio for 30 minutes and mix that all together, then add lots of tales of questionable sexual misadventures.

Borchetta is excited to introduce his newest signing, the writer of regional favorite "Bring Your Friend Too." "Tucker brings a certain frankness which is sorely missing in music these days," beamed Borchetta. "His approach will certainly ruffle some feathers, but rest assured that he has great respect for women."

"I has great respect for women," said Mitchelson, echoing his boss' sentiments. "My approach will certainly rustle some feathers, but I think we need some people keeping it 100 in this day and age." "My songs are funny, so nobody should be offended - it's just sapphire [sic] - I love chicks, so why would I write songs that make them not want to hang out with me?"

He went on to explain that "'I'll Slap a Ho' is sung from the point of view of a "sexualist" dude who doesn't respect women like I do." Mitchelson told us he plans to defray any backlash against his 'satirical' lyrics by donating a portion of his signing bonus to "sexual harassment."

"Sure, these songs are ballsy, if not stupid, to release in the current environment, but hey, rap is worse…" argued Borchetta. "And you should see all the little girls singing along to 'Sixteen's Just a Number.'"