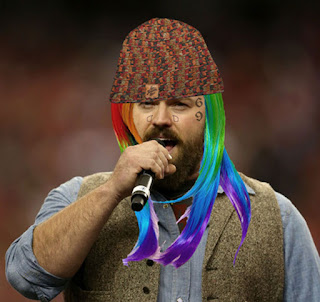 Zac Brown's seemingly insatiable desire to record and release music in every existing genre took its next logical step this week as he unveiled yet another side project, the mumble rap artist Lil Beanie. Signed to Zac's own Southern Ground label, Beanie (Brown himself, with fake face tattoos and a wig) is currently prepping the release of his debut single "Marching Powder."

The song, a not even slightly veiled ode to selling copious amounts of cocaine, is a mid-tempo track that bounces along on a slick electronic beat with Beanie's sparse lyrics peppered across the composition. The chorus simply repeats "marchin' powda" 25 times, but Lil assures us this is how hip-hop is done nowadays.

Beanie's first album, Mean Streetz of Lumpkin, is set to drop in late summer, with opening dates on the Zac Brown tour to support the record.

Brown's other side project, Sir Rosevelt, will also play each of the ZBB dates. That act's single "Something Bout You" is going for adds at country radio despite clearly being not a country song. Whether Beanie's music will be released to country radio is "up in the air" (meaning: yes, it definitely will).

At press time, Zac Brown had announced auditions for yet another another side project, the death metal outfit Deérguts.