Willie Nelson to Record Duets Album With You 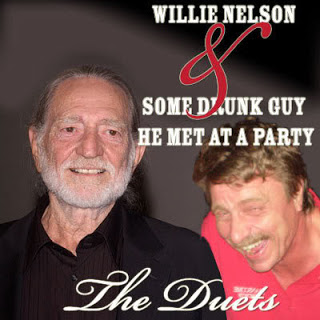 Willie Nelson has announced that his next studio album will be a collection of duets with you. He plans to show up at your house around 6ish this evening to begin work on the project. Singing lessons will be unnecessary as Nelson believes you have an "earthy everyman/woman vibe" that will translate well to his 376th official release.

The songs will include several traditional standards such as "Wayfaring Stranger," a couple tracks by top Nashville songwriters, and a few as-yet-nonexistent cowrites with you. When asked what the album might sound like, Nelson mentioned "an organic and freewheeling set of unpolished but exciting country songs."

You will go on a short full-band tour with the country legend, including stop-offs in Austin and L.A., as well as an acoustic radio tour for release week. There will also be a taped GAC special called "Willie and (your nickname)."

After a quick final "session" on his bus, you will resume your normal life, while Willie will return to the studio to begin work on his follow-up album, a collaboration with T-Pain titled Willie n' Pain due out later this year.