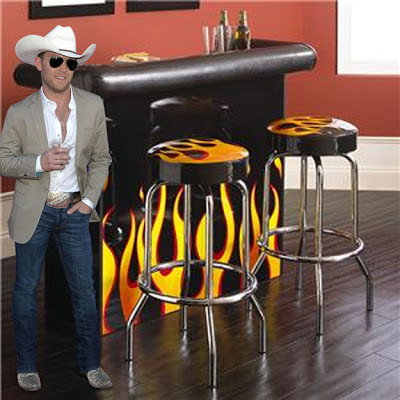 by Trailer - Originally posted on Country California, September 22, 2009
At last month's Sturgis Bike Rally in Sturgis, SD, abridged-stature country singer Justin Moore was forced to leave the stage mid-concert due to the unruly crowd. Moore, who just celebrated his first #1 song with "Small Town USA," was unable to perform over the wave of raucous laughter which began halfway through his song "I Could Kick Your Ass," so he unceremoniously exited with several minutes left in his set.

"I couldn't help it," snickered North Carolina motorcycle enthusiast Clyde 'Bonegrinder' McGee. "I mean, the song was okay, but really? Really? That joker couldn't be more than 4 foot 9. He couldn't kick my lady friend's ass." "I've taken dumps bigger than him," laughed Murder City Riders Motor Club president Remus Barksdale, "and I thought country music was supposed to be about authenticity."

The show got off to a promising start in the first half, with the crowd even singing along by the end of "Back That Thang Up" and waving flags patriotically through "Good Ol' American Way." However, things went south by the second chorus of "I Could Kick Your Ass."

"I wasn't sure I'd heard him right the first time, but when he sang it again... 'I could kick your ass, I could jack your jaw'... I 'bout wet myself," said Linda Morrow of Chicago from atop her gleaming Harley Fat Boy. "He's a cute little thang, but jeez, you're standing on a phone book to reach the mic, dude."

Laughter began from near the tattoo stand and spread like wildfire, drowning out the band and the elfin singer in a matter of seconds. Moore valiantly attempted to finish the song, but ultimately could not hear himself well enough to continue. Despite the chaos and scattered reports of sides injured from too much laughter, no one was arrested at the concert.

Moore declined comment, but his management says there are no plans to make up the date in the short term.