Unlike most songs Trailer sends me to review, I actually listened to this one, called "House Fire." I thought it was pretty good. Then I read that Tyler Childs has signed a deal with a major record label. So I listened too the song again and realized it wasn’t very good at all! Its weird how your taste can change from one minute to the next.

This song says something about “honey jump on my train.” I seem to remember some bro-country bro singing about a chick sliding her fine ass into his truck a few years ago. Or one dude singing about sticking his umbrella in a woman’s sink?!? Sounds like Tyler Childers has gone the same damn way! That’s to perverted for me! 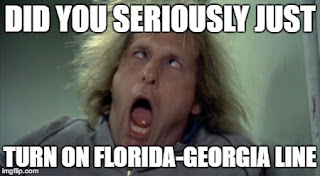 And don’t get me started about the production of this song! It’s all sparkles and shine and listen! You can actually hear every word and it sounds like they want everybody too like the song! What the hell?? Tyler is supposed to sing to 14 people and a chicken in a water district office parking lot for the rest of his days, not get popular! 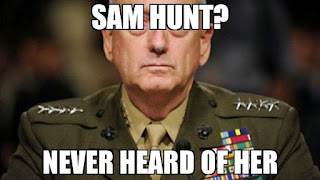 Why make it sound so pretty? I want it too sound like he’s singing through a shoe. I want the guitars to sound like all the strings are about to break and the guitarist doesn’t really know what he’s doing. I want there to be a cloud of dust come out of my speakers when I listen too the song. Their shouldn’t even be a drummer. And Tyler should forget some of the words and have to restart a verse, and they should leave that in the damn mix!! That’s country! Not this overproduced bullshit that Sturgill Simpson (that sellout) screwed up! 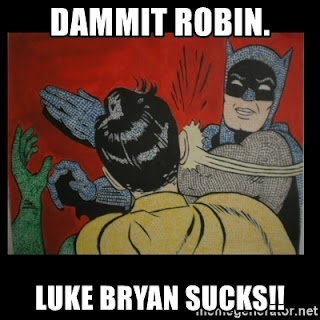 Luke Bryan? Never heard of her! But from what I’ve heard about her, I imagine Tyler Childress will soon be on that same path. He’ll be shaking his butt in tight blue jeans and making preteen girls squeal and singing about how country his truck is or some shit. Its sad when you’re favorite artists get popular and change from what you liked about them. I hope he enjoys the money, but he won’t get another .00005 cents from me on Spotify!! I’m done.