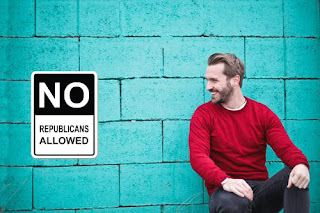 Rising Americana singer Benjamyn Lackey has built quite a following in his short 3 years on the scene. He’s traversed the US to adoring crowds, opening for the likes of Sturgill Simpson and Cody Jinks. His debut album showed up on the top 10 of several year end lists in 2016. He’s even been acclaimed by stars like Vince Vaughn and (AEW wrestler) Cody Rhodes on social media, but Lackey’s teaser single for his forthcoming sophomore album Hens in the Roadpath is meeting with a deafening silence.

The tune, a stripped-down acoustic and drum folk tune entitled “If You’re Republican, Don’t Be My Fan,” has only been streamed 1024 times on Spotify in its 2 months of release. The song’s reception in concert has been similarly subdued.

“I know it’ll take time to catch on, but people at shows just kind of look back and forth at each other during the song.” Said Lackey. “Maybe they’re commiserating with one another non-verbally over the craziness of the world these days. I’m sure they all agree with me that Republicans are literally as bad as Pol Pot.”

“If You’re Republican..” Is Benjamyn’s first foray into protest music, and critics have been sharply divided. Rolling Stone Country called it “a brave line in the sand and a masterpiece of modern political music, if a questionable commercial approach.” Helping Country Music devoted 15 paragraphs to describing the song as overwrought. Farce the Music made a couple of non-commital but clever memes about it.

We asked fans about the song after a recent show, and they were a bit more forthcoming deep in the beers. “All his other songs are poetic and well-written; that one sounds like a first year political science major frat boy wrote it after a conservative chick turned him down.” said Jennifer Pulaski, a confirmed liberal. “F**k him!” yelled Phil Baker, a Republican. “His other songs kick ass so I’ll come to his damn shows if I want to; what’s he gonna do? Stand at the door with a voter roll?” The crowd, split about 50/50 across the political divide, was firmly in agreement on the ham-fistedness of the song and said that they looked back and forth at one another during its performance as a communal “wtf is this sh*t?”

At press time, Lackey’s label was considering replacing “If You’re Republican, Don’t Be My Fan” on the unreleased album’s track-listing with a more fan friendly “Whiskey Dick.”

A sampling of the lyrics of “IYRDBMF” follows.
The world’s so crazy these days
Everybody’s screaming, throwing hands
But only the left is right
So I’m saying with all my might
If you’re Republican, don’t be my fan