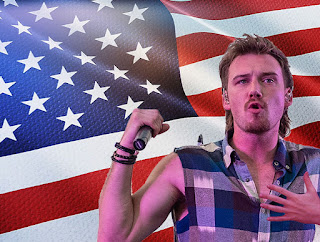 A viral video from a recent Morgan Wallen concert has tongues wagging and fans swooning. No, it’s not the clip of the cute little girl singing Wallen lyrics. It’s a 24 second video of the up-and-coming mullet-headed country singer reciting the Pledge of Allegiance, and the reactions have been perplexing.

On the video, Wallen appears, hand on chest before a waving flag on the back screen, saying those familiar words we all learned in grade school. His band softly plays “America the Beautiful” and the crowd is hushed as the solemn words fill the amphitheater. They erupt when he’s finished, and more than a few posted the moment to YouTube almost immediately.

In the 72 hours since its posting, the clearest of the videos has garnered 105,000 views and 150 comments. It has also spread on Facebook and Twitter over the past couple days. Many of the responders seem convinced that Wallen himself wrote the pledge, which was originally composed by Capt. George Thatcher Balch during the Civil War.

Lucy Griffiths of Waco, TX, said on Facebook: “This man makes me so proud to be an American. How has know one every written a love poem for the flag before? (Sic)” Her post had 10k views, 250 shares, and 56 comments, all fawning over the supposed Wallen-scribed pledge. This was one of hundreds of posts, most describing Wallen as the “ultimate patriot” or “more smarter than most dudes what wears sleeveless shirts.” 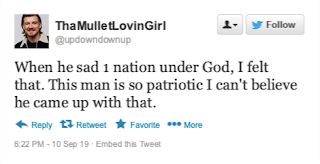 Twitter was also abuzz, featuring many tweets like the 2 above. Another, from ILucyWallen said “first he wrote the beautiful “Cover Me Up” (editor's note: actually written and recorded first by Jason Isbell) and now this!! Morgan is an artistic genius, full stop.” Patriotic party-poopers soon ratioed the Morgan Wallen fans into deleting the tweets or quitting Twitter.

At press time, Wallen’s camp had no comment on the viral video, and he was reportedly busy working a shift at his friend’s fireworks stand.