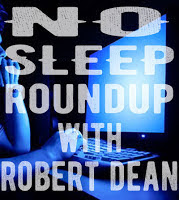 It’s me, your pal Robert Dean. I’ve been MIA lately because of some pretty big life changes, making a television show is stressful, and I’ve been trying to finish my new book all while keeping my shit together. So, forgive my absence.

That aside, let’s do the dance.

My Chemical Romance are coming back. Nerds who used to wear women’s jeans in 2003 are fucking stoked. Hopefully, they write new music that’s more “Three Cheers for The Black Parade” and less of whatever the whack Queen shit was.

Rage Against The Machine are finally playing some shows. Thank god Zach has agreed to come out of hiding. I only wrote about this very thing like, three years ago or whatever. They’d better play Calm Like a Bomb or I’m going to be pissed. (Yes, I’m flying to one of the shows because I’m a fanboy.)

RANDOM THOUGHT: Go buy Joshua Hedley’s record, Mr. Jukebox. It’s a fucking crime people slept on that dude. He should be household name for dudes who wear embroidered shirts unironically. Easily one the best country records of the last five years and people don’t know it.

Sturgill and Tyler are going on tour together. That’s going to be a massive deal. They’re playing the United Center in Chicago. For context, that’s where Paul McCartney plays when he comes to town. All this for a guy who wrote a song about turtles while on acid. Shit is wild.

Evan Felker apparently recorded a tune with Carrie Rodriguez before Turnpike Troubadours went on stupid hiatus. Look, man. The song was fine. It sounds like Shovels and Rope. But for fucks sake, get sober, go to church, whatever. Get Turnpike Troubadours back on track.

Cody Jinks dropped a pair of records….and they both went to number 1. In the words of the mighty Jack Nicholson, “watch out. Big balls comin’ through.”

Need a random album suggestion? Go back and listen to the first Stevie Wonder record. When he was a kid. That shit will blow your mind. “I was made to love her” is my jam.

Recently, Lucero made a bunch of the Among the Ghosts demos available for streaming. You know our nerd asses were all about that. Collectively between Trailer and I, we’ve probably seen Lucero over 30 times.