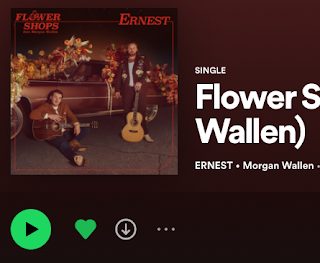 Hello, longtime follow. I know we have generally gotten along for years on this godforsaken social media network. I know we haven’t actually discussed politics, even though I think I know yours and I KNOW you know mine. I know we both love country and Americana music and don’t care for pop-country and that we could probably share a beer and have a nice time.

HOWEVER…. I saw who you really are yesterday and for that I must bid adieu.

You’ve rarely mentioned Donald Trump, despite (I assume) being a conservative. You’ve never made any overtly racist, homophobic, transphobic, or sexist Tweets that I can recall. You don’t even follow Jordan Peterson or Don Jr. (I actually do, so I can be angry all the time).

BUT…. It’s clear what you feel in your heart of hearts.

When you tweeted “I’m not a fan of either guy, but that new Ernest & Morgan Wallen song is surprisingly good and surprisingly country,” it became clear to me that I was following a vile racist. You may not have said as much, and may never have said as much in the 4 years and 10 months I have followed you, and may have never uttered a single racist word, joke, or thought in your entire life, but there is no doubt in my mind that your hatred for black people is incompatible with my de haut en bas morality.

The entire weight of 400 years of servitude, imprisonment, discrimination, othering, red-lining, and dismissal fell upon my shoulders as I read those 21 words from your repugnant mind. I was literally weeping and shaking, knowing my internet acquaintance had betrayed my trust and the trust of 80 million+ Americans.

That you even clicked ‘play’ on a song that included MoreKlan Wallen was one thing. That you were able to overcome the bile rising in your throat and the sense of performative rage creeping into your mind to dare utter that you found the song “surprisingly good” is a testament to your inhumanity.

I know you’ve shared memes making fun of Wallen. I know you spoke ill of Wallen when the “n-word” video came out, but this dark world calls for action, not words. Your words leave you on the side of David Duke, Scott Baio, Nathan Bedford Forrest, and Kid Rock. Just because your ears and mind find something pleasurable doesn’t mean you have to allow yourself to like it, much less announce that to society. I pray you find your way back to the correct side of history.