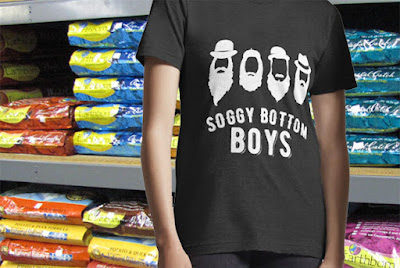 Outlaw said that he approached Landry on the dog food aisle and graciously complimented her on her choice of apparel. After a short conversation about the trio’s musicianship and songwriting, (which Landry said she assumed was tongue in cheek) Outlaw began to sense her ignorance and went in for the kill.

“All she could name was ‘Man of Constant Sorrow’ which everybody on earth who isn’t a dumbass Luke Bryan fan knows,” said Outlaw. “I was embarrassed for her and said she ought not wear that shirt in public being no more of a fan than that.”

“It’s not a real band,” said an exasperated Landry. “Does he want me to name songs the fictional group performed in the movie O Brother Where Art Thou? I’m not even sure what he was getting at besides trying to prove some kind of batshit crazy country authenticity.”

When faced with Landry’s accusation that he, in fact, was the one posturing, Outlaw replied: “Look, I don’t even know what that means, but I will stand up for real country music any time I get the chance. She’s the one on pot, or whatever.”

Ms. Landry quickly ended the conversation with an abrupt “Bless your heart,” and as she walked away, Outlaw yelled “Go listen to Walker Brown or Kane McGraw, you f***ing fake ass! Bet you don’t even listen to Dusty Chandler!”