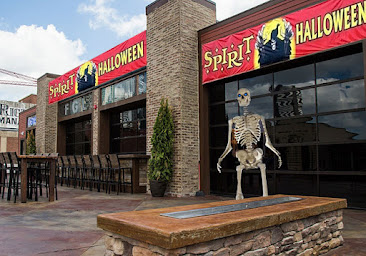 Nashville residents may recognize a familiar face in an unfamiliar place this week. Spirit Halloween, the spooky holiday’s most famous franchise, opens up shop in the former FGL House Friday, though some of the accoutrements of the former bro-country bar still remain.
“We didn’t have to do a lot, the place is already pretty terrifying,” laughed franchise owner Sparky Suggs. “The moose head, the antique light fixtures, the haunting scent of Axe, the ghosts of hookups past… all we had to do was add the Halloween products.”

The 4-story brick building in Sobro has been the home of boozy duo Florida-Georgia Line’s branded bar and grill for the past several years, but no more. The duo recently began what they’re calling a hiatus, but which everyone else sees as the end of the formerly popular “butt rock of country” act. The immediate closure and sale of the building seems to lend credence to this opinion.

Suggs certainly understands the concerns over the sudden shift, but he hopes many of the mullet-headed or tube-top-wearing FGL fans who show up will stick around and grab an LED dancing zombie or a sexy Fireball bottle costume. “You’re already here, so you might as well pick up some crap you needed for Halloween anyway,” laughed Suggs.

One drunken customer didn’t seem to notice the change and was seated at one of the bars (now a booth for custom airbrushed trick or treat bags) trying to order a Jagerbomb from the confused artist. “He’ll figure it out eventually,” said Suggs, shaking his head.

At press time, Brian Kelley was sneaking in to retrieve his Kid Rock autographed beer bong he left in a storage closet.