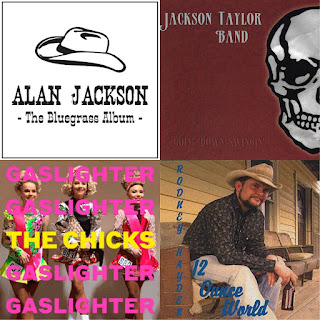 Freddie Robison of Ink Media Designs in Nashville is pissed. "Who do they think they are?!" he rants. "I went to school for this sh*t. And you wonder why every other new cover uses Bleeding Cowboys font…"

The music industry's downturn in recent years has been a challenge to design firms specializing in art and marketing for the music industry, but the latest wrinkle is proving to be the most disconcerting.

"I got an email directly from a major country star a couple of weeks ago," explained Robison. "I won't say who, but it rhymes with 'rustin' chore.' Anyway, it said 'This is the artwork for my new album cover, please check to make sure it's ready for printing.'" Robison continued: "There was nothing attached so I replied and let him know. The next email had a .html file attached that wouldn't open in any software I own. I replied again and said that I'd need a high-res tiff or jpeg file. Well, I got a jpeg, but it was 100x100 pixels and 72 dpi. It went on like this for some time before I just redesigned the damn thing myself and didn't charge him."

Robison went on to say that he wasn't picking on "rustin' chore" in particular, but that this was now the rule, not the exception. More and more – their cash stretched thin from declining album sales – artists have turned to writing their own songs… and now, designing their own album and website art.

This has resulted in reduced productivity among prepress professionals and graphic artists across the Nashville area. Missing fonts, lack of bleed, RGB color, bad file types, corrupt files, low resolution photographs and other issues have been reported in multitude.

"Seriously though, how hard can you pinch a dime? My firm gets $85-100 bucks an hour for this… I don't even take home a quarter of that. It's hard to keep gas in a Maybach, I guess," pondered Robison.

Robison also told us of one flat-chested female singer who'd simply used Photoshop Elements to copy and paste Kim Kardashian's chest over her own for her inner sleeve photo. "And she used Comic Sans for her lyrics… I mean, WTF?"