I recently received a file from CM Wilcox of the former Country California that includes all my old fake news posted at that dearly departed site. Some of them aren't relevant anymore or don't make sense to repost, but from time to time, I'll be posting some of those stories for your reading enjoyment or annoyance. Here's one. 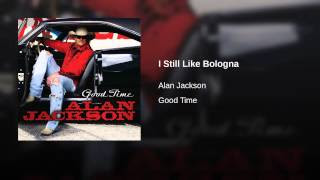 As lead single "It's Just That Way" hits select radio stations, Alan Jackson has made an open call for a particular song type to fill out the track listing on his next studio album.

"Well shucks," said the long tall Georgian, "we were doing a final listen through of all the tracks to determine the song order for the new record and noticed something strange. All the songs were devoid of awkward 'hip' phrases, bad near-rhymes, strange metaphors, dopey technology references and lines that would sound corny or dated by next year. I grabbed Keith (Stegall, his producer) and told him, 'Doggone man, we've gotta open up a slot!'"

To that end, Jackson has announced that single song submissions will be accepted through January 31, 2010 for a possible cut on his late spring release.

"I could write one myself, but I'm a little burned out on songs about not liking to wear sandals and I can't think of any more not-that-clever ways to say I'm a simple man, so I wanted to invite fans and fellow writers to submit their own turds," laughed Jackson. "I don't know, maybe something about that Kenya West fella or something?"

The near-legendary traditionalist country singer has a stellar record of classic songs during his twenty year career, but has made sure to give a little something back to the undiscerning fan on every record.

"You know, Brad Paisley used to put a gospel song on every CD; it was his signature for a while. Well, my signature is one ill-advised, shockingly embarrassing cut per record," explained Jackson, who named "www.memory," "I Still Like Bologna," and "that one about cornbread and chicken" as examples.