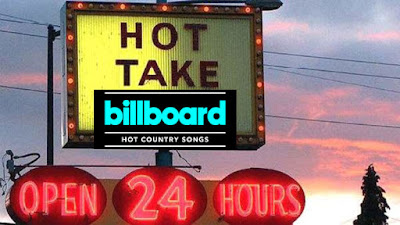 by Travis Erwin
Those of us who enjoy the humor, scorn, and reviews here at Farce The Music can often be found up on our soapbox railing against the insipidness of mainstream country. But how bad is it?
I decided to take a look with a dive into the current Billboard Hot Country Chart.
One by one I listened to the tunes and here is my no-holds barred assessment starting at the bottom and working my way up per their rankings. They list 50, but I limited my exposure to only the top 25 because a man can only wade through so much shit before he too starts to stink.
25) The Bones — Maren Morris ---  I will give Morris credit for infusing some emotion that feels genuine … which makes this an above average pop song
24) What Happens In A Small Town — Brantley Gilbert with Lindsay Ell --- I actually enjoyed Lindsay Ell’s voice here, but per usual, Gilbert confuses vocal strain with emotion. If you enjoy predictable lyrics, sang with constipation, then Gilbert is routinely your man.
23) What If I Never Get Over You – Lady Antebellum ---  If you have a damn good pair of binoculars, you can see the country from here on the island of Adult Contemporary Radio.
22) I Don’t Know About You — Chris Lane --- Basically a Bro Country Tinder conversation. Do yourself a favor and swipe left.

21) Notice — Thomas Rhett ---  Watch out Jonas Brothers and Shawn Mendes you have competition for your sing-song style of pop.
20) Every Little Honky Tonk Bar — George Strait --- First decent country song and while not many share this opinion, I have long thought Strait to be overrated as an artist. Cool dude for sure, but given he rarely writes his own material and is far from a creative musical genius, I view him more as the world’s best karaoke singer than King of anything. [editor’s note: I’m docking your pay!]
19) The Ones That Didn’t Make It Back Home — Justin Moore ---  I applaud the intent, but this is one of those singles that feels more like pandering to an audience than it does a meaningful tribute.
18) Raised On Country — Chris Young --- First few lines contain the words … Southern Drawl, pick-up, and boots. Yes sir, we have a song written using the Country Music Mad Libs method. I confess I didn’t keep listening because I heard enough three lines in.
17)  Shut Up About Politics — John Rich --- Rich is from my hometown, but we have both left Amarillo. That comment has no meaning to this list and frankly this song has no lasting meaning either. File this one under disposable, just like the proverbial red cup mentioned in this pandering set of lyrics.
16) Rearview Town — Jason Aldean --- I have never been an Aldean fan and this song does not change that but all-in-all this isn’t a horrible single. Written by Nashville stalwarts Kelley Lovelace, Bobby Pinson, and Neil Thrasher this is about as good as big label/corporate-driven songwriting gets.
15) Talk You Out of It — Florida Georgia Line --- I have heard way worse FGL songs so if your girl has poor musical taste go ahead put this one and try to seduce her. But if it works, she ain’t the one.
14) Some Of It — Eric Church --- I actually like this single. Written by Jeff Hyde, Clint Daniels and Bobby Pinson who makes a second appearance on the list, Church sounds a little bit like Robert Ellis on this one, and that is a good thing. IT is the best I’ve heard from Church.

13) On My Way To You — Cody Johnson --- Johnson is one of many Strait-influenced artists out of Texas and while I am usually left wanting for more grit and emotions out of his chosen material, he does have talent.
12) All To Myself — Dan + Shay --- This duo is to country music what  Bath & Body Works is to the mall. Too clean. Too fragrant. And no place a man goes without being dragged there by his significant other.
11) Knockin’ Boots — Luke Bryan --- Hard to say what is worse, Bryan’s Gomer Pyle laced voice, or this pandering set of horrendous lyrics.
10) Girl — Maren Morris --- Again, I respect Morris’s vocal talent, but I struggle to call this country. I don’t hate this song, but it is mislabeled.
9) Love Someone — Brett Eldridge --- I just wish someone on this list had more heartache, more pain, more grit than they do product in their well-coiffed hair.
8) Speechless — Dan + Shay --- Verne Gosdin has been gone for a decade now but if the man known as “The Voice” was handed this single and told this is a Top Ten Country hit in 2019, he would be the one rendered speechless.
7) Miss Me More — Kelsea Ballerini --- Sounds a little Faith Hill-esque. I will give this one credit for having some rebel spirit. Let’s call it the Taco Bell of country because it has the ingredients of good Mexican food, but the taste isn’t quite there.

6)  Good As You — Kane Brown --- Yet another single full of smooth rhythms and touchy-feely sentiments of love. I am not against love but come on guys this shit flows like a string of Hallmark cards and that ain’t true to life.
5) Beer Never Broke My Heart — Luke Combs --- Be careful what you ask for. Finally a broken hearted song and while it is better than most of the songs on this list it isn’t a song a can take all that serious. Combs has a good sound but lyrically this song is a far cry from Whitley or Haggard.
4) Rumor — Lee Brice --- There is much worse on this list but at this point all I am thinking is when can I go back to me regular playlist of Houston Marchman, Dan Johnson, and Tom Russell?
3) Look What God Gave Her — Thomas Rhett --- Musicians used to get laid by being aloof, cool bad ass. Now it seems they are trying to get laid by using Dr. Phil’s Textbook of Emotional Pandering.
2) Whiskey Glasses — Morgan Wallen --- I like Wallen’s vocal tone but the cadence of this song is awful about thirty seconds in. Come on Son, just song the pain don’t try to purty it all up and for all that is hole get rid of all that repetitive line ‘em bullshit on the back end.
1) God’s Country — Blake Shelton --- Over the years, Shelton has put out a handful of songs I actually enjoyed, but this one is nothing more than okay. And with that designation, he joins about that many on this list that aren’t horrible.

There you have it.
My opinion on the current Top 25 Country Songs according to Billboard. A few halfway decent country songs, a few more decent pop songs misnamed, and a bunch of pandering pablum.
I am sure we have a few disagreements, but the beauty of music is such that it hits every set of ears differently. Still I stand by assessment that mainstream country is suffering from a lack of grit and realness.
Tell me what you think, I love a good argument.
—————
TRAVIS ERWIN is an author and music blogger best known for his love of dark beer, red meat, and of course, his comedic memoir, THE FEEDSTORE CHRONICLES. Other published works include the short story collection HEMINGWAY and a pair of novels TWISTED ROADS and WAITING ON THE RIVER. Travis also blogs about music at THE FEELS and with LA on Lock.