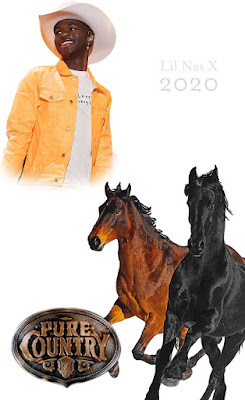 In his first ever acting role, rapper Lil Nas X is slated to take up the reins country legend George Strait once held in the early 90s cult favorite Pure Country. X, real name Montero Lamar Hill, will play Dusty Chandler, a disillusioned country superstar who walks away from the lights and fame to reclaim his soul, and finds love along the way. Dexter Fletcher (Rocketman) will direct the picture for Warner Brothers and a release is expected in the fall of 2020.

Though some Strait songs will be sampled or updated for the film, most of the music will be co-written and performed by Lil Nas X himself. The viral smash “Old Town Road” will of course be featured, but expect some twists. “We’ve got a ‘Heartland’ remix coming and it gives you the best of both worlds, tying the (2020) version of Pure Country to the original. It’s going to be fire and lit and whatnot.” said the rapper.

A love interest for Dusty has not yet been cast, leaving unanswered a major question that will surely be heavily debated on social media in coming weeks. Lil Nas X recently came out as gay, but it is uncertain at this point how the subject of romance will be handled in the film.

Tyler James Williams (Everybody Hates Chris) will take on the role of Buddy Jackson, a brash young artist who attempts to swindle his way to stardom in Dusty’s absence. Reba McEntire will play Lula Rogers, Chandler’s desperate manager.

At press time, literally every person, brand, and bot discussing the reboot of Pure Country online was outraged for various, conflicting, and frequently incoherent reasons.