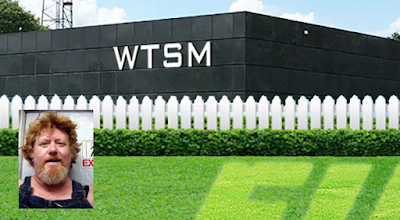 by Trailer - Originally posted on Country California, May 03, 2013

Police said Spears, who has a long record of misdemeanors and public complaints, was taken into custody without incident at the country station as he admired his work from the seat of his John Deere riding lawnmower. Deputy William Cranston said the man was finishing off a bottle of whiskey and singing to himself before turning around with his hands behind his back.

"We'd gotten a few calls about a white male driving a mower through town with shoes dragging behind, but hadn't been able to find him until the radio station manager called us," said Cranston.

WTSM manager Bart McGee confronted the man before calling police.  "I asked him if he was with our lawn care service because he looked suspicious and kind of familiar. There wasn't a truck or trailer anywhere, just him on his mower," said McGee. "It wasn't until he said something about us only playing George Jones because he died that I noticed what he'd just done... there was a huge 'F**k You' mowed into the grass."

Although Mr. Spears was not available for comment at press time, his wife - Laverne Spears, also local was all too pleased to fill us in on the events leading up to the incident. "His alarm clock woke him up with the radio playing that Forrest Gump remix of 'Finally Friday' and he got up cranky. He said he was gonna show them sumb*tches about respecting the Possum."

"He went out and cranked up the mower and I thought he was just gonna cut the yard till he drove off down the road," she continued.  Spears' ride apparently took him to Barney's Package Store, then the Goodwill Store, where he was seen tying shoes behind the mower. He snarled mid-morning traffic as he drove the slow-moving vehicle through the town square to his final destination.

"He pointed at those shoes behind his mower and asked me 'Who the f**k's gonna fill em? Fake Shelton?' I could smell whiskey on his breath," recounts McGee. "Then a light came on and I remembered he was the same guy who cut our signal a couple of years back for playing 'Christmas Shoes.' What a kook!"

Spears may now be facing some actual jail time due to his prior record. His charges for this "protest" include operating a non-street-legal vehicle in traffic, driving while intoxicated and vandalism.  "That vandalism charge is bullsh*t," claims Mrs. Spears. "Their grass was high as an armadillo's *ss. He was helping them out. They can kiss my *ss too! Long live the Possum!"