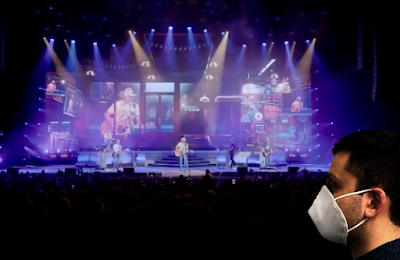 Country superstar Jason Aldean recently praised his New York fans for their lack of masks at his Wantagh show on August 7th. While certain jurisdictions, venues, and organizations either mandate or urge the use of masks during the continued Covid-19 pandemic, the singer was happy to see his crowd defy those suggestions.

One man Aldean didn’t notice, however, was definitely wearing a mask.

Ben Trask of Levittown withstood the stares and occasional crude remarks from fellow concert-goers and kept his face covering on for the entire duration of the show. He also wore the mask while driving to and leaving the show.

When asked if he donned the fabric over health concerns, Trask laughed. “Hell no. I just didn’t want anybody I know to see me going to, being in attendance at, or leaving a Jason Aldean concert.”

Trask was tasked with taking his step-daughter and her friends to the concert after drawing the short straw among the group of parents. “My wife got lucky!” said Trask. “She didn’t have to sit through this droning motherf***er for 2 damn hours singing about fields and trucks and trucks and fields.”

“I liked one of the opening singers, Lainey Wilson, but the rest of it was pure garbage,” he continued. “I’d be mortified if somebody took my picture being at this shitshow. They had a f***ing DJ, for god’s sake! At a supposed country concert!”

At press time, Ben was making sure his daughter didn’t tag him in any Facebook photo posts.