By Kevin Broughton
Portland, Ore. -- After a chaotic and tumultuous four years – and an otherworldly 2020 – it’s only fitting that unbounded bliss can turn to crushing morosity in an instant. Such is the roller coaster existence of Patterson Hood, the Portland-based activist and political commentator who moonlights as the front man for the Drive By Truckers.
Saturday, Nov. 7 was a joyous day by all accounts in the City of Roses. First CNN, then Fox News, and then all the other networks and wire services followed in turn: Joe Biden, they reported, would be the 46th President of the United States. Mostly peaceful celebrants rushed into the streets.
“It was beautiful, man,” Hood says. “Four years of fascism, finally over.” The Oregonian thought himself alone in his bliss, until that perfect moment when he found a kindred – and musical – spirit. “Kasey Anderson and I ran into each other. It turns out we were both throwing acid at the same Portland so-called ‘firefighters,’” he says. “Those dudes were f*cking with freedom-fighters who had mostly peacefully torched an Apple Store in celebration of Biden’s big win. I got the whole thing on my iPhone 12.” 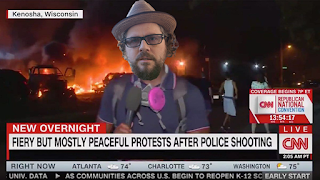 Jubilation became concern on multiple levels, to Hood’s chagrin. “Turns out Kasey’s on Federal paper and has an ankle bracelet,” Hood says. “Well, he said he had an ankle bracelet. I think it was a baby monitor, to tell you the truth. Anyway, he hauled ass when they made a curfew announcement on the loudspeakers.”
Hood was undeterred, if now alone. And yet…
“I joined up with some other freedom fighters, at the last Taco Bell before it peacefully went up in flames…” Hood trails off here, caught up in the memory of a poignant moment in Portland social justice history. He is a little weepy.
“I got in line,” Hood says, choking up a bit before recovering his composure. “And person after person, be it he/she/xi/xxyx/cis, every one of us HUMAN PEOPLE said to Juan – so his corporate name tag said – YES, MY ORDER IS FOR A LIVING WAGE FOR ALL LETTUCE PICKERS IN THE CENTRAL VALLEY.”
Hood isn’t shy admitting he enjoyed the sick burn. “I mean face it, what are corporatists gonna say in the face of that kind of truth?” Sadly, the euphoric social triumph would give way to realpolitik. Such is the duality of the Southern thing – Patterson Hood-style.
“What totally freaked me out was that there was a whole other set of elections going on at the same time or whatever,” said Hood, who attended some college courses in Northern Alabama in the 1980s. “There are senate elections that happen, too. And there are some elections that happen in Georgia or whatever. And in January!”
Hood – after reading the same story in The Daily Kos three times – grew tense. When he learned that two Senate runoffs in Georgia could drastically impact President-elect Biden’s agenda, he was at first cynical. “Typical redneck Georgia, man,” Hood said. “It’s just the same Jim Crow stuff: they make a Democrat win twice, just because he’s a black guy. This kind of racist shit is why I left Georgia after living there for like 20 years or something.”
Yet rather than curse the darkness, Hood turned to a literary light.
“Somebody turned me on to this guy Tom Friedman? He writes for the New York Times and magazines, too,” he said. “He’s like an expert, but still can deal with the common man. He’s interviewed taxi drivers from Athens to Rome. Which is perfect, since those are my two favorite cities in Georgia!”
It was a national television interview of Friedman that grabbed the fifty-something poet’s attention.
“I mean, dude, that takes it up a notch,” Hood said. “This is serious activism! I thought my friend Topher in L.A. was owning the MAGA’s with his radical phone-banking.” 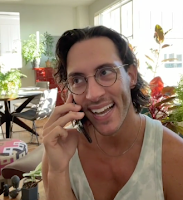 “I mean, I love the way my boy mimics that cis-white woman’s stupid accent, but you gotta give the nod to the writer guy,” he said. “Which is why I’m headed back to Georgia so I can vote for Rafael Warnock…and that one cis-white guy too, since he’s also a Democrat.” Asked if he had voted in Oregon, and if that might pose legal problems in the Peach State, Hood grew indignant.
“So f*cking what, man? I mean, you gonna buy into this Jim Crow myth of “voter fraud?” Hood snapped. “You’re telling me it’s against the law to go to Georgia to vote for a black man? It’s the most anti-racist thing to do, ever. Check your patriarchy and your white privilege, bro. Seriously. Besides, Gov. Abrams will pardon us all.”
As he gathered his things to prepare for his cross-country political odyssey, he took a moment to address a music-industry rumor about his band’s most recent political album. “It is nobody’s business whether President Xi and the Peoples’ Cultural Collective sent us a small donation to support our art,” Hood said. “Besides, you can’t prove it, and it’s a totally racist and sinophobic thing to say. Only a fear-mongering redneck from Texas would say such a thing.
-- fake news
The latest nonsense from Farcer at 10:30 AM 0 complaints