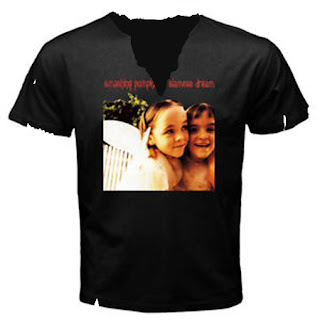 A $12 "vintage look" Smashing Pumpkins t-shirt was recently purchased from a Chicago area Walmart and mutilated for the express purpose of making Nick "Slickdawg" Bolan, the dipshit bassist for a major mainstream country singer, look badass. This absolute asshat took a pair of scissors to the cheap approximation of a Siamese Dream tour shirt, tearing holes in the sleeves and removing the neck fabric completely, all to make it appear to unknowing fans that he is a Pumpkins fan from way back.

Fans were none-the-wiser at the Friday night concert, shouting their approval and throwing up the rock hand sign (a ™ of Gene Simmons Inc. 2017) as the ridiculous looking ballbag pounced around the stage behind his meaty band leader. "Whoooo Smashing Pumpkins!" yelled Evanston native Carly Sitz. "I don't know who that is, but the bassist looks like a total bad ass!"

The v-cut neck of the black shirt bearing a photo of two little girls huddled closely, hung low across the turd's shaven and sculpted chest muscles, revealing an ample display of tacky skull necklaces and moronic tribal tattoos. The 15 year old female fans and their inappropriately dressed mothers ate it up.

Bolan, who's only ever heard one Smashing Pumpkins song because it's played over the arena sound system before shows, pouted and shot fierce looks into the sea of fans, who responded in awe at the posing tool's putrid mohawk-mullet combo and fake biker apparel. The fuckstick never missed a lick as he laid down a groove for hit after bro-country hit, his wallet chain swaying through the strobe lights.

The jerk-off plans to wear a shredded Goo Goo Dolls shirt for the next show in Minneapolis, having idiotically mistaken the Goo Goo Dolls for Minneapolis' Soul Asylum. The asinine choad's equally insipid stylist believes this will somehow grant him 'street cred' from a crowd of teenagers who've never heard of either band.

At press time, Bolan was shining his square-toe boots while listening to Lil Uzi Vert.
The latest nonsense from Farcer at 10:30 AM 0 complaints

From one of the most surprisingly satisfying albums of 2012, Smashing Pumpkins' true comeback record Oceania, here they are with "Pinwheels."

The latest nonsense from Trailer at 2:30 PM 0 complaints