I've heard some people calling Sturgill Simpson's new album a sellout. I'm one of those people I've heard saying that. Why Sturgill Why?

You had such a good thing going with the REAL DAMN country music, and you went and did this? Their's horns on here! Lots of them. Horns are not country. I mean, at least you don't have any record scratching or 808 beats, lol. But still, I'd rather here Sturgill put out the same album over and over then have to listen to this one more time.

Who the hell is Luke Bryan? I'll stick to the true Country Artists! Just had to get that out of the way for this review. I'd rather listen to myself being shot point blank in the face with a 12 gauge than listen to a Luke Bryan song. Yes, I mean that. I would rather die then spend 3 minutes of my life unhappy. 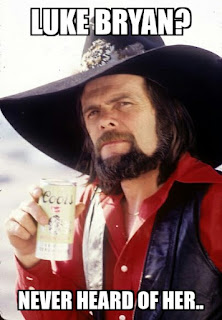 Back to Sturgill. I feel betrayed. Its nice he wrote some songs for his son or whatever, but ain't it bad parenting if you don't teach you're kids to listen to just COUNTRY DAMN music? I don't remember if I heard any steal guitar on here or not, because I tried to block the whole thing out of my memory then I poured bleach in my ears. 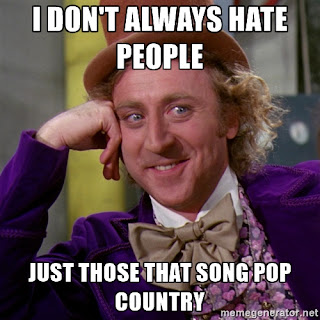 I mean this isn't as bad as Florida-Georgia Line, I don't think so anyway.. because I've never heard them but there terrible. This is just not good. Theirs a difference. FGL can't turn around and record a song that sounds like Waylon tomorrow, Sturgill can. And he should. I'm pretty pissed off about it. Life is about finding a spot that fits you and staying right the hell there. Why rock the boat? 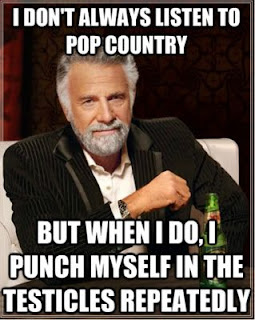 I'm worried, Sturgill. Since you decided to do a album of Usher songs like this, maybe your gonna change it up again next time and sing about trucks. Don't do it. Don't make me angry, you won't like it of I am angry!
The latest nonsense from Farcer at 10:30 AM