John Rich's House Even Cooler Than You Thought 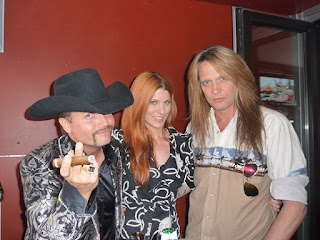 When it comes to country superstar John Rich, even the home he lives in is controversial. Called an eyesore and a blight by "jealous neighbors," Mt. Richmore is even cooler than you might have imagined, says an anonymous source who has visited the well-equipped abode several times.

This insider, who asked us to refer to him as Bart Mozart, says all the bright lights pointing away from Rich's home are for good reason. "It's so nosy-ass locals can't see all the cool sh** in there. Dude, they'd sh** a brick if they knew!" said Bart.

We've all heard about the fully-stocked bar in the elevator, but that's just the tip of the awesomeness iceberg, according to Mr. Mozart. There are also mini-bars in each of the five bathrooms, another fully-stocked bar in the master bedroom and a wine locker the size of a football field directly underneath the house. In addition to those liquid amenities, Mt. Richmore's main bar (staffed by two bartenders and six buxom waitresses) also has a bar in its bathroom, and the pool table opens to reveal a beer vault.

Behind the family room on the second story, Rich has built a full recording studio with enough room for an entire band with backing horns to rehearse or record crappy music at the same time. There is also a bar both in this studio and in the control booth, with Rich's own "Richmore Ale" on draft directly from the soundboard.

One would think that so much potential drinking might lead to some accidents, but Bart says JR has planned for this. "Every room has a vacuum system built into the floor to suck up anything you spill, and the walls are made of a super strong polymer that's kinda soft to fall against but tough enough to withstand a brawl or a thrown vase, not that those things ever happen," informed Mozart.

"Bart" went on to describe the pad's home theater (w/ bar), garage (x2), kitchen (yep) and dining room (sure), all designed with the most forward-thinking style, technology and accommodations for drinkers available on the market today. He also said to catch him on the latest season of Celebrity Fit Camp on VH1 - then he tried to retract that statement.

In summary, Mt. Richmore is truly a marvel of western innovation.