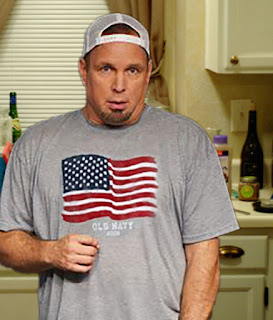 The somber, emaciated (for him) 51-year-old across the table from our correspondent stood in stark contrast to the color-block shirted, barrel-chested wild man of Nashville memory as he confessed that "girls are expensive."

Despite 200 million in album sales, years of sold out concert tours and an estimated $350 million in career earnings, the country legend is surviving on Spam and saltine crackers these days as he plots his comeback. "I know, I know... I've seen all those VH1 specials about guys like MC Hammer and thought, how the hell did they go through all that money?" admitted Brooks, pulling at a loose thread on his 2008 Old Navy America t-shirt.

Brooks put his career on hiatus in 2001 to see his daughters through high school and into college. The costs of his divorce that year and the upbringing of three girls was a far greater financial strain than any of his fans might have imagined. "Well, Sandy got half and the girls got the other half," chuckled Garth, sipping Big K Cola from a can. "I didn't know Bratz cost so damn much."

"I've also burned through most of Trisha's money with some bad investments," he continued, with a tear the size of a quarter building in his left eye. "The pager store franchise went under in '02... damn cell phones. And my personal brand of offensively bright shirts for big and tall men never got off the ground due to a sweat-shop scandal."

His three-year Vegas run only put a band-aid on the problem as bills and tuition costs slowly ate away at Brooks' remaining fortune. "I've lost 60 pounds, man; all my old 'Mo' Bettas look like circus tents on me now. I'm going in for a third mortgage on the mansion."

A potential comeback is in the cards, though the 26-year Nashville vet is not currently aligned with a record label. "Borchetta is interested in a comeback album, but he's not sure I'll fit the Big Machine mold. Hell, I guess I'd do auto-tune and sing about trucks... I need some money, pardner!" said Brooks.

The "Friends in Low Places" superstar bid us adieu for his afternoon Starbucks shift with these off-topic words: "Everybody blames me for pop-country, but I'm Hank Sr. compared to folks these days..."

At press time, Scott Borchetta had passed on Garth Brooks for a 19-year-old community college dropout with a five o'clock shadow and an intriguing chin scar.